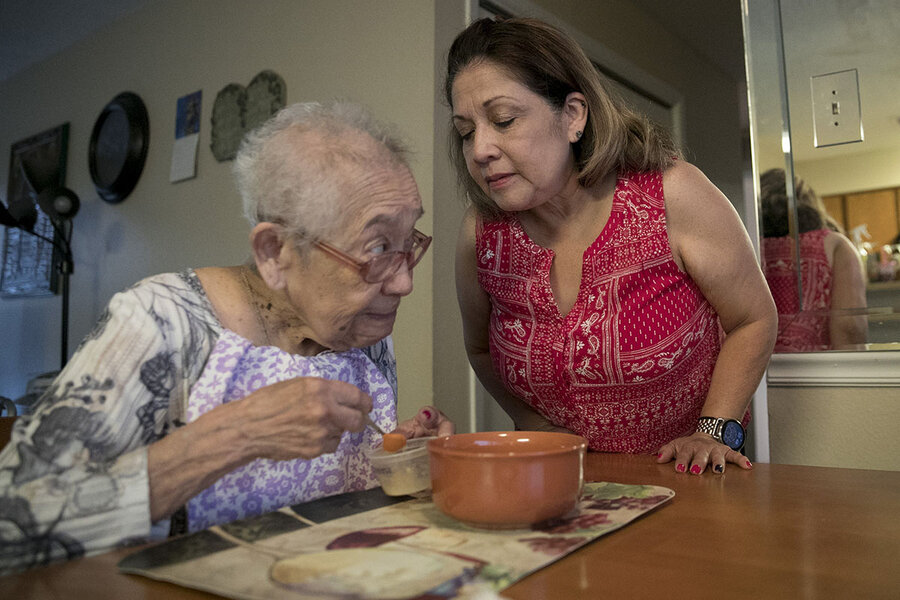 The pandemic has shined a spotlight on the often-obscured lives of Americans in nursing homes, and the industry that runs them. But even before COVID-19, alternatives to institutional care were expanding in many states – and now, advocates see a chance to help more Americans age the way they want to.

Smaller-scale, better-staffed elder care appears to have done better during the pandemic. The greater prize, though, is letting seniors age in their homes and communities, providing a sense of belonging. Models vary, from publicly-funded day centers to small modular houses that can be added to existing properties or built in clusters. Today, more than half of Medicaid dollars are spent on home- and community-based services.

Some advocates say the root of the industry’s problems is not money or policy but social attitudes. In an age-stratified society, caring for the old isn’t a common goal but a headache to solve, so vulnerable elders are sent to homes staffed by low-paid carers.

Geriatrician Bill Thomas, who founded the Green House movement to reimagine nursing homes, hopes to see a generational shift. What COVID-19 has done, he says, is change the velocity: “Instead of hoping to make something happen in 10 years we’re trying to make it happen in 10 months.”

When geriatrician Bill Thomas first sat down to reimagine American nursing homes, the risk of a deadly pandemic wasn’t on his mind. His vision was of elder-directed care on a human scale, an alternative to the “big box” homes staffed and run like hospitals.

Nearly two decades on, the Green House movement he birthed has spread to 300 homes in 32 states. And when COVID-19 hit, its design features – clusters of small buildings with private rooms and bathrooms – helped to reduce infections, even in hard-hit cities like Boston and Detroit.

Dr. Thomas says these features provide a sense of belonging which most nursing homes lack. And they lead to better health outcomes. “If you fix the broken heart it’s also good for the body, and it’s good for preventing infections,” he says.

For decades, reformers like Dr. Thomas have attempted to improve nursing homes. They have built alternative models – less institutional, smaller scale, better staffed – that appear to have done better during the pandemic.

But the greater prize is to help more elders age in their homes and communities. As COVID-19 roils the nursing home industry and the federal spending behind it, that goal may be in reach, reformers say.

“Most people would prefer to age in place, at home, if at all possible. The COVID epidemic might strengthen that, as people feel safer at home,” says Anne Montgomery, co-director of elder care improvement at Altarum Institute, a nonprofit health consultancy.

The vast majority of Americans aged 65 and older currently live at home. But seniors who require support services often end up in nursing homes because they rely on Medicaid to pay for long-term care. In recent years, alternatives to institutional care have expanded in many states, using Medicaid waivers. More than half of Medicaid dollars are spent on home- and community-based services today.

Now COVID-19 has shined a spotlight on the often-obscured lives of around 1.5 million Americans, with more than a third of deaths coming in nursing homes. The pandemic has upended the finances and reputations of home operators. It has disrupted the profitable flow of new residents discharged from hospitals. And it has forced the industry more generally to defend its poor record on infection control and other measures of quality and safety.

“The compact that people have made is to trade away certain freedoms and autonomy, and even respect and dignity, in return for a promise of security and safety. The COVID-19 pandemic has revealed that they [nursing homes] have not been able to fulfill that,” says Kavan Peterson, a Seattle-based advocate and co-founder with Dr. Thomas of ChangingAging.

Nursing homes have pushed back against critics, pointing to the rapid spread of COVID-19 in urban areas where hard-hit homes were located. They also say public-health officials failed to provide needed equipment and guidance.

Regardless, the challenges they face are significant.

“Nursing homes have been set up to fail. They have extremely vulnerable populations,” says Michael Barnett, assistant professor of health policy and management at the Harvard T.H. Chan School of Public Health. “They have workers who are underpaid and are largely immigrants and minorities who live in communities that are the worst affected.”

Alternatives to traditional nursing homes vary from $4,000-a-month private assisted-living facilities to publicly-funded adult day centers to at-home visits by carers. PACE Centers, which already provide a wide array of services to the elderly and disabled in 31 states, are another path to expanding non-institutional care options.

A major impediment to independent senior living is cost. “Not everyone is going to be able to afford to pay people for basic assistance to age in place and stay at home,” says Ms. Montgomery of the Altarum Insititute.

One modest solution is a new federal program, Community Care Corps. It recently awarded $2.4 million in grants to 23 nonprofits nationwide. The nonprofits will deploy volunteers to support family caregivers, seniors, and people with disabilities living independently. Altarum Institute is helping to evaluate its effectiveness. “This is the age of volunteerism. We need more volunteers,” says Ms. Montgomery, also a former policy adviser to the Senate Special Committee on Aging.

For his part, Dr. Thomas wants to reimagine what that home looks like. Only 10% of U.S. housing is considered age-friendly.

His vision is a home that is age-friendly, affordable, and woven into a community of all ages so that elders can sustain the connections that he sees as essential to longevity. He’s designed a small modular house he calls a Minka that can be added to existing properties or built in clusters to create new communities. The houses can be as small as 330 square feet, but are designed for the elderly and their needs. Affordable housing can also be set aside for young renters who can help seniors with daily tasks.

In the Netherlands, city planners have added housing for students in buildings and courtyards with seniors, as well as making it easier for families to build add-ons for the elderly.

Dr. Thomas hopes such innovations can spur a generational shift in the U.S. away from nursing homes as inevitable. That shift is already underway, as home and community care grows more popular, and policymakers grapple with the costs of long-term care.

Dene Peterson, age 91, has spent the pandemic in her Appalachian co-housing community in Abingdon, Virginia, which has around 40 seniors. Her ElderSpirit Community formed a task force that set down some ground rules: social distancing, no house visits, masks required outside.

As a result, she says, “We’ve had no contamination here at all.”

While Ms. Peterson misses aqua aerobics class at the local pool, she has learned to socialize with her neighbors via Zoom. The app was introduced by “the young people” – the 60-year-olds.

The former nun founded ElderSpirit in 2006 as a way to age in place together, and her mixed-income, multifaith community for ages 55 and up thrives on mutual support.

“One of the best things is the fact that we manage ourselves,” she says. “We’ve set up so that everybody has a chance to be useful.”

Those with heightened medical needs can choose to move to assisted living, or arrange family caregivers or home health care in the comfort of their residence. Ms. Peterson plans on the latter. “It’s one of the best ways of growing old that I know,” she says. “You’re not lonely.”

Even the most ardent critics of “big box” homes accept the need for nursing homes in an aging society. Over the last decade, the number of 65-and-older Americans has grown by a third to 54 million, according to Census Bureau data. Home-based care is harder to regulate than nursing facilities and providers face similar challenges in recruiting low-paid carers.

In tough economic times, families also find it harder to care for their elders; caregivers already face the burden of lost earnings and reduced pensions. While Medicaid pays for traditional nursing care as a safety net, eligibility for home and community services varies by state.

Nursing home operators have long complained that reimbursements from Medicaid, averaging $200 a day, are too low to pay for the skilled nursing that residents need. Many homes use Medicare payments for post-acute short-term care to cross-subsidize their long-term beds.

This funding structure is one reason why few new nursing homes were being built, even before COVID-19, relative to the growing elderly population.

In 2003, Steve McAlilly built the first Green House nursing home in Tupelo, Mississippi. The organization he leads, Methodist Senior Services, now has 19 homes statewide. All are built to Dr. Thomas’s design of small buildings with individual rooms, staffed by nurse aides who also cook and clean and are known as shahbaz, denoting a higher status than normal aides. (Dr. Thomas is no longer formally involved with the Green House Project, which is based in Linthicum, Maryland.)

Mr. McAlilly’s nonprofit also operates a traditional 60-bed nursing home. When COVID-19 began spreading in local nursing homes last month, he took all precautions to protect his residents. In the 60-bed home, 26 residents tested positive and 3 died, and 20 staff were also sickened, he says. By contrast, only one Green House had a small outbreak and nobody died.

“The same management, the same culture. The only difference is the design,” he says.

Susan Ryan, senior director of the Green House Project, says only six residents in 245 homes surveyed nationwide have died of COVID-19. Facility layout was one factor. Another was staffing: The shahbaz model means residents don’t see a cadre of nurses, aides, and other workers.

“The direct care staff that is providing care to the elders are also doing the cooking and cleaning, and that means there are fewer people coming to do those activities,” she says.

Green Houses cost more to build and most are run by nonprofits, while the rest of the nursing-industry mostly follows a model that is more like a hospital than a home.

But a for-profit operator in Arkansas has begun to build more Green Houses, rather than expand other types of care homes, says Mr. McAlilly. The pandemic has made families rethink traditional nursing facilities. The developer “believes this is the future,” he says.

Developers tend to build large nursing homes because scale is seen as necessary in an industry that relies on federal reimbursement that operators say hasn’t kept pace with costs. Those costs have risen during the pandemic, while income from both long-term residents and short-term Medicare-funded stays has declined.

Still, some advocates say the root of the problem exposed by the pandemic is not money or policy but social attitudes. In an age-stratified society, caring for the old isn’t a common goal but a headache to solve, so vulnerable elders are sent to homes staffed by low-paid carers.

In polls, around half of Americans over 40 say that “almost everyone” is likely to need long-term care, but only 25% believe this applies to them. Advocates say this mismatch helps explain why policymakers have been slow to reform the nursing-home sector.

“We have ageism and we have racism and that has had a tremendous impact on what we’re seeing. As a society we have accepted what some call warehousing. We have almost dehumanized elders, they have been the Other,” says Ms. Ryan of the Green House Project.

She adds: “If we don’t take this pandemic and learn from it, shame on us.”