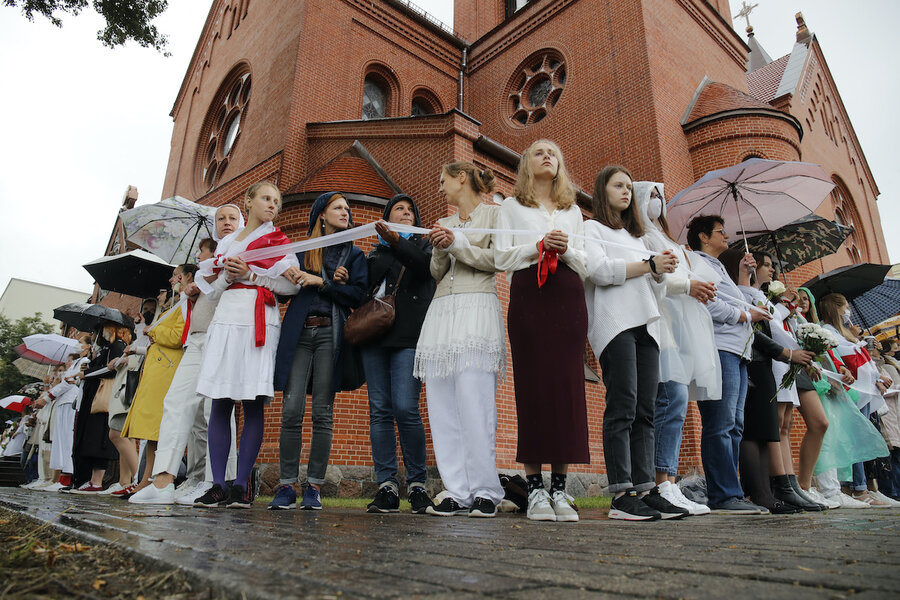 Russian President Vladimir Putin warned that he stands ready to send police to Belarus if protests there turn violent, but added in an interview broadcast Thursday that there is no such need now and voiced hope for stabilizing the situation in the neighboring country.

Belarus’ authoritarian president of 26 years, Alexander Lukashenko, is facing weeks of protests against his reelection to a sixth term in the Aug. 9 vote, which the opposition says was rigged.

Mr. Putin told Russia’s state television that Mr. Lukashenko has asked him to prepare a Russian law enforcement contingent to deploy to Belarus if necessary.

Mr. Putin said that he and Mr. Lukashenko have agreed that “there is no such need now, and I hope there won’t be.”

“We have agreed not to use it until the situation starts spinning out of control and extremist elements acting under the cover of political slogans cross certain borders and engage in banditry and start burning cars, houses, and banks or take over administrative buildings,” he said.

The Coordination Council, created by the Belarusian opposition to facilitate a peaceful transition of power, criticized Mr. Putin’s statement, saying it’s “inadmissible” for any country to form armed units for use on the territory of Belarus.

“This contradicts international law and consolidated position of Belarusian society,” it said in a statement.

In an apparent jab at the West, which has condemned Mr. Lukashenko’s crackdown on protesters and urged him to launch a dialogue with the opposition, Mr. Putin accused unidentified foreign forces of trying to win political advantages from the turmoil in Belarus.

“They want to influence those processes and reach certain decisions, which they think conform with their political interests,” Mr. Putin said.

Russia sees the neighbor as a key bulwark against Western expansion and an important conduit for Russian energy exports. The two countries have a union agreement envisaging close political, economic, and military ties, and Mr. Lukashenko has relied on cheap Russian energy and other subsidies to keep Belarus’ Soviet-style economy afloat.

Despite the close cooperation, Russia-Belarus relations have often been strained by disputes. Mr. Lukashenko frequently played overtures to the West and accused Moscow of hatching plans to incorporate Belarus.

Just before the election, Belarus arrested 32 private Russian military contractors on charges of planning to stage riots. Belarusian authorities released the men shortly after the vote in a bid to mend ties with the Kremlin amid rising Western criticism.

In the interview, Mr. Putin described the incident as a provocation by the Ukrainian and the U.S. spy agencies, charging that they lured the Russians to travel to Belarus by promising them jobs in a third country and made the Belarusian authorities believe they had a mission to destabilize the country.

Seeking Moscow’s support, Mr. Lukashenko has cast the protests as part of a Western plot to weaken Russia.

On Thursday, he accused Belarus’ neighbors of open interference in its affairs with a push for new elections in what he described as a “hybrid war” and “diplomatic carnage.” He charged that Poland was harboring plans to take over the Grodno region on the border, saying that it prompted the deployment of additional Belarusian troops to the frontier.

The U.S. and the European Union have criticized the Aug. 9 election that extended Mr. Lukashenko’s rule as neither free nor fair and encouraged Belarusian authorities to engage in a dialogue with the opposition.

The Belarusian leader, who has ruled the nation of 9.5 million with an iron fist since 1994, has dismissed the protesters as Western puppets and refused to engage in dialogue with the opposition, which is contesting his reelection to a sixth term.

After a brutal crackdown on demonstrators in the first days of post-election protests, when nearly 7,000 people were detained, hundreds were injured, and at least three protesters died, the authorities changed tactics and let daily demonstrations go unhindered for nearly two weeks. The government, meanwhile, has maintained pressure on the opposition with threats and selective jailing of its leaders.