Fewer than 5% of patients with brain tumours have a predisposing genetic syndrome. The most common of these are von Recklinghausen’s types I and II neurofibromatosis, tuberous sclerosis, von Hippel-Lindau disease, and the epidermal nevus syndrome. These dominantly inherited neurocutaneous syndromes are associated with an increased incidence of specific tumours.

There are more than 120 types of tumours of the CNS.

Neuroepithelial tumours are the most common and feared tumours of adult life and occur most frequently as astrocytoma, oligodendroglioma, and ependymoma.

What is a hemangioblastoma?

Hemangioblastomas (HBs) of the central nervous system (CNS) are histologically benign, slow-growing tumours, which may occur as sporadic lesions or in association with von Hippel­Lindau (VHL) disease.

What is von Hippel-Lindau or VHL?

von Hippel-Lindau or VHL which is a genetic defect that causes capillary growth to go out of control. While the tiniest blood vessels or capillaries usually branch out gracefully like trees, in VHL patients a little knot of extra capillaries forms a growth or tumour and in certain cases, it turns cancerous. It is a genetic form of cancer VHL patients battle a series of tumours throughout their life.

VHL may occur in up to 10 organs of the body like liver, kidney, brain, spinal cord or retina, inner ear, pancreas, pheochromocytoma, paraganglioma can also happen.

The two innermost layers of tissue, arachnoid mater and pia mater that cover the brain and spinal cord are together called the leptomeninges.

Hemangioblastomas of the CNS are solid or cystic vascular-rich tumours, most common in the cerebellum, less frequent in the brainstem or spinal cord and rare in supratentorial locations with meningeal involvement.

Hemangioblastomas of the central nervous system are the most common tumours seen in patients with von Hippel-Lindau (VHL) disease.

Leptomeningeal dissemination of hemangioblastomas (HB) of the central nervous system (CNS) is extremely rare. Between 1902 and 2013, approximately 132 cases were reported. Few studies have reported leptomeningeal involvement in sporadic HB or in HB associated with von Hippel­Lindau syndrome.

Diffuse infiltration of the leptomeninges is known as hemangioblastomatosis and has been observed both in VHL disease and in patients with spontaneous mutations.

Detecting and treating the condition of leptomeningeal hemangioblastoma without delay seems to help survival, though the number of patients analysed is small. Patients may have other underlying health issues which may affect the data.

Because no case of de novo development of disseminated HB without previous surgery has been reported, it is strongly suggested that the spillage and spread of tumour cells through the CSF space may be an origin of hemangioblastomatosis in patients with a genetic predisposition to the condition, Care should be taken to avoid tumour cell spillage during surgery.

Prior to surgery of the initial tumour, planned embolization should be undertaken if possible to reduce blood loss. However, depending on the actual tumour structure embolization may be found not to be possible. Reducing blood loss may also help in reducing tumour cell spillage and spread.

Looking at tumour cells in the spinal fluid under high-resolution MRI scans are all that is necessary for an accurate diagnosis. A biopsy isn’t required for diagnosis as it may cause meningitis and blood loss thereby cell spillage.

My experience with leptomeningeal hemangioblastomas for 7 years?

I was diagnosed with supranational leptomeningeal hemangioblastomas in 2013. I have been seeking anyone experiencing the same condition but didn’t find anyone till now. 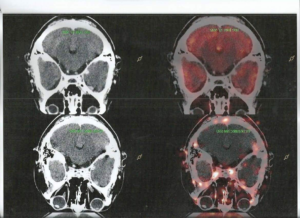 ” you have more tumours in the brain than people have lice in hair.”

There is no data on the competence of the surgeons and equipment used in the initial CNS surgery so trying to determine if cell spread was caused by any incompetence during my brain surgery (craniotomy) in 2006 would be extremely difficult if not impossible to prove beyond a reasonable doubt. The fact that the physiology of each tumour is different and the number of cases is so small means that an accurate comparison of surgeons is impossible.

These tumours are extremely vascular. A biopsy would make them bleed resulting in a stroke. After my first brain tumour surgery, done in 2006 I woke up with paralysis on the left side. After the craniotomy ( open brain surgery) I experienced total numbness in my arms and hands and I couldn’t close my fingers and make a fist. But this was sorted out by proper physiotherapy and exercise and I got back the control of my limbs but even now I don’t have sensations in my fingertips.

I get stereotactic radio-surgery before the growing tumours start putting pressure on the brain and become symptomatic. I have lost vision of my right eye for not being able to avail radiation therapy at the right time because of financial reasons and also because  I was diagnosed with an RCC ( kidney cancer) at the same time. 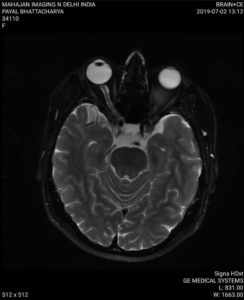 Advanced radiation techniques, such as radiosurgery, are more effective than conventionally fractionated radiotherapy, but it is difficult to perform high-dose radiation therapy or radiosurgery for numerous lesions scattered throughout the brain.

Radiosurgery appears to be safe and has prevented local recurrences in my case, with fewer sessions than conventional radiation which caused white matter changes representing chronic ischemic changes. I couldn’t afford a cyberknife and underwent conventional radiation therapy in 2017 after which this happened. 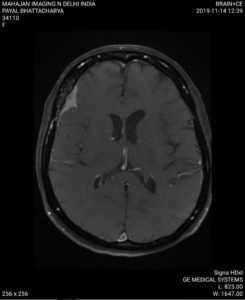 It is a new exciting technology which may help people trying to minimise collateral damage which with radiation treatments has always been the challenge.

The precision of proton therapy can be critical for protecting the brain’s delicate tissues.

Proton therapy can limit the amount of normal brain tissue receiving radiation. That reduces the effects on important functions, such as vision and hearing.

Proton radiation may be less likely to damage nearby organs, such as the heart and lungs while treating areas around the spinal cord. This technique is safe and potentially effective.

Often, people with these recurrent tumours have received significant radiation doses in the past to important parts of the brain. These may include optic nerves, which are critical to vision, and the brainstem, which regulates many essential body functions, such as breathing, heart rate, and swallowing.

To treat more people with proton therapy is by making the technology even more accessible. Currently, this technology is available only in Apollo Chennai and expensive enough to cost an arm and leg.

If only, governments or some trust or Institute sponsors the high cost of my treatment. I could have a better and longer life and my quality of life would be better.