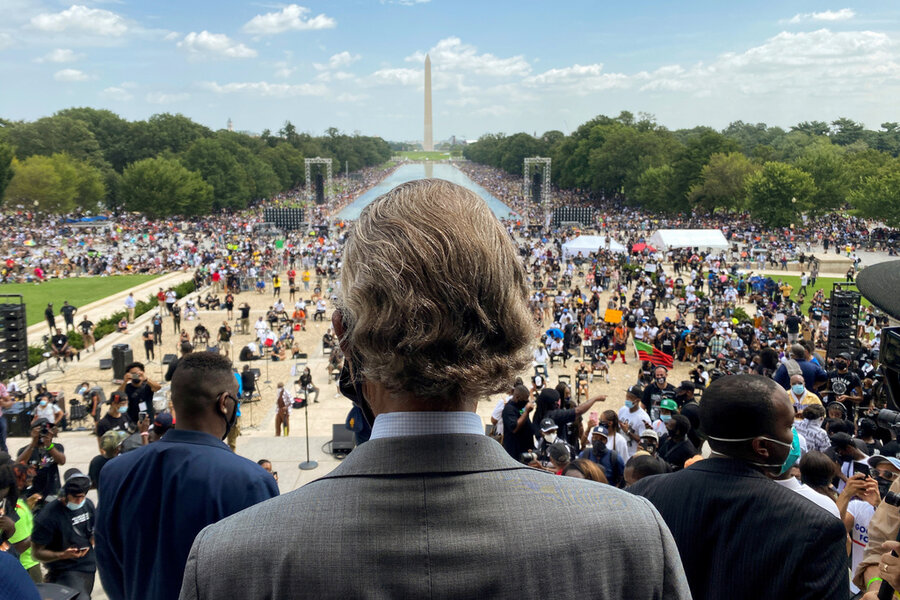 As protests go, the one in Washington today on the steps of the Lincoln Memorial was perhaps the largest since the killing of George Floyd in Minneapolis. Thousands of people rallied in a call for criminal justice reform and racial equality. But crowd size was not the point. After weeks of marches across the United States that also saw violence committed largely by those not advocating for social change, the Washington rally was remarkable for its peacefulness.

That is important as the rally was held on the 57th anniversary of Martin Luther King Jr.’s “I Have a Dream” address in the same place. He left a legacy of using nonviolence as a tool for change. Lately, with violence around the protests, American society has been in need of a large display of civil behavior.

Protests by unarmed civilians remain critical for those who seek an end to unnecessary violence against Black people by police. Relying on the opposite of physical force carries moral authority, or what the famous Czech dissident Václav Havel called “power of the powerless.” In itself, nonviolent activism creates social trust and a civic culture. It attracts others by signaling a value of love. It often melts the resistance of security forces or others trying to end legal protests with violence. And it puts a spotlight on those who keep resorting to violence.

Around the world, nonviolent resistance against nondemocratic authorities has been rising over the past few years even as authoritarianism is on an uptick. Digital organizing enables quicker assembly of street demonstrations and other civil dissent. Also a victory in one country for nonviolent protests is now more visible in other countries.

Nonviolent resistance, writes scholar Jonathan Pinckney in a new book, “From Dissent to Democracy,” helps people envision a different order. “This makes it inherently creative, expressive, and empowering.” He says there have been 78 transitions to democracy by the use of peaceful protests between 1945 and 2011. Nonviolent campaigns are three times more likely to end in democracy than other challenges to a regime, such as through a military coup or a revolt by a powerful elite.

The latest country to enjoy a burst of peaceful pro-democracy protests is the former Soviet state of Belarus. Three weeks after the country’s dictator rigged an election, civic activism keeps growing. “Belarusians have gained a new-found sense of dignity and belief in the power of nonviolent collective action,” writes Mr. Pinckney.

Peace is an action. It not only helps bring democracy or improve on it, it can also sustain it.