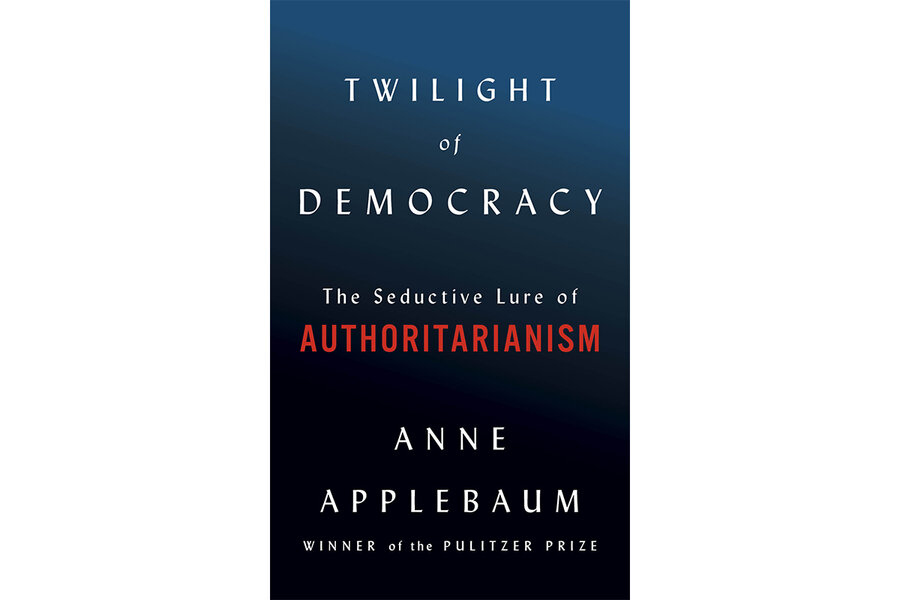 Back in another time, journalist and Pulitzer Prize-winning historian Anne Applebaum and her husband, Radosław Sikorski, threw a high-spirited New Year’s Eve party at their manor house in rural Poland to celebrate the turn of the millennium. Sikorski was then a deputy minister in the country’s center-right government, and his native homeland had become his American wife’s adopted one. The guests, a klatch of journalists, diplomats, and civil servants, belonged to a highbrow conservative crowd that shared a set of common beliefs: They were anti-Communist and pro-democracy, and they supported Poland’s entrance into the European Union.

Twenty years later, in her compelling new book “Twilight of Democracy: The Seductive Lure of Authoritarianism,” Applebaum writes that “I would now cross the street to avoid some of the people who were at my New Year’s Eve party. They, in turn, would not only refuse to enter my house, they would be embarrassed to admit they had ever been there.”

While the author and her husband have held tight to their core convictions, a number of their guests drifted further right to the nationalist Law and Justice party. The party’s standard-bearer, Andrzej Duda, just narrowly won reelection to a second term as Polish president after appealing to anti-immigrant, anti-EU, and anti-gay sentiment; during his first term, Law and Justice instituted antidemocratic measures that have gravely undermined the independence of the country’s judiciary and its media.

The question that animates this slim volume is personal for the author: Why have her former friends embraced Duda’s authoritarianism? The crude stereotype of the followers of authoritarian movements is that they live on the fringes, having been left behind by economic, demographic, and technological change. Her erstwhile acquaintances in Poland, however, are worldly, educated, and employed.

Applebaum is aware that, as she puts it, authoritarians “need members of the intellectual and educated elite … who will help them launch a war on the rest of the intellectual and educated elite.” Why, though, do the elites accept the gig? Poland, of course, is not the only country experiencing a rise in illiberal and antidemocratic political movements, and Applebaum extends her analysis to include Hungary, Spain, Britain, and yes, the United States.

There is no single reason that liberal democracy is in such a precarious state, Applebaum notes. In crisp, elegant prose, she explores several explanations, some of which readers may find familiar. She describes the emotional power of conspiracy theories and of simple narratives that encourage national unity against a common enemy, even if that enemy is often more imagined than real. In Hungary, for instance, the government of autocratic prime minister Viktor Orbán demonizes Muslim immigrants even though the country hardly has any thanks to exceedingly restrictive immigration laws.

Applebaum also cites the easy lure of a certain type of nostalgia, one that papers over the ambivalent legacies of the past. Nostalgists “want the cartoon version of history, and more importantly, they want to live in it, right now,” she writes. She sees this type of longing as pivotal to the success of the Brexit campaign, some of whose proponents were fixated on returning England to its former preeminence on the global stage.

Finally, she observes that the intense fracturing of the media landscape, which encourages people to get their information from hyper-partisan and polarizing news sources, facilitates movement away from the political center. Many sources traffic in false stories and propaganda. “People have always had different opinions,” she notes. “Now they have different facts.”