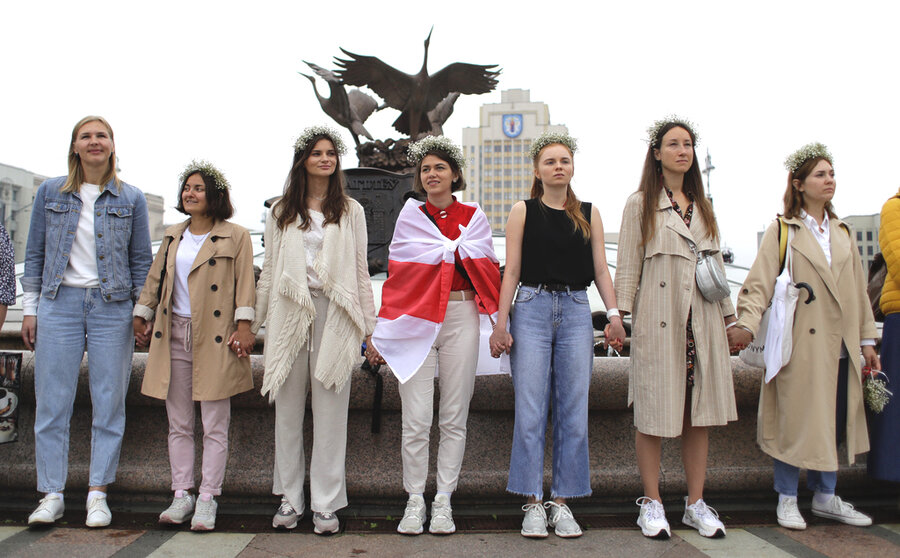 In violent conflicts, peace often comes in unexpected ways, and directly from the work of women. Take note of what happened in Belarus after a rigged election on Aug. 9 resulted in peaceful demonstrations against dictator-president Alexander Lukashenko – and then a brutal crackdown by police on the protesters.

The violence brought thousands of women to the streets of Belarus. For days in mid-August, they wore white, held flowers aloft, and talked to the police. They held hands in long chains of nonviolent civil resistance. Soon after, many workers in state factories went on strike. European leaders took notice and threatened sanctions against the regime for its violence.

As the pro-democracy protests have continued and now include a wider range of people, the regime has been forced to switch tactics. It is detaining or questioning protest leaders one by one. Much of Belarusian society is clearly no longer on the side of a violent ruler.

One leader of the women’s demonstrations, Maria Kalesnikava, explains why their use of symbols of peace and empathy – hugs, smiles, flowers, the color white – helped turn public opinion. “We decided to appeal to mutual respect and personal dignity,” she told the Atlantic Council. “These signs help to build respect between people.”

“For the last 26 years, authorities showed disrespect, humiliation, and intimidation to people in different positions. … Anger, violence – it works for a very short term. Self-esteem, respect, love [is] something eternal,” she said.

In many countries where violence has erupted, the work of women often made a difference in peacemaking because many of them bring qualities of inclusiveness. Their role was pivotal, for example, in ending a civil war in Liberia, arranging cease-fires in Colombia, and toppling a dictator in Sudan. Based on studies, when women serve as mediators or signatories, peace accords are 35% more likely to last at least 15 years. Since 2000, when the United Nations began to focus on including more women in negotiating an end to violent conflicts, the portion of peace agreements that included a reference to women rose from 11% to 27%.

“We must not overlook the importance of increasingly involving women in peace building, because they’re rarely involved in causing the conflict in the first place,” says Nancy Lindborg, former president of the U.S. Institute of Peace.

In Belarus, the “women in white” did step up to curb police violence, thus helping to widen the appeal of moving the country to democracy. Peace can indeed come in unexpected ways.