The organization chart depicted below originates from IBM and is true for most organisations till date. 103 years and we are still carrying the legacy.

While in the last century major things have changed in the world, this archiac organization chart still is prevalent in many organisations.

Akin to the command-and-control model that was designed through initial studies on industrial relations, it was designed for a world that no longer exists- 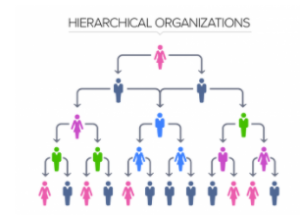 The world which we live in now is not only highly complex and complicated but also changing at unimaginable speed. The rigid structure of a hierarchy not only builds bureaucracy and thus heartburn in employees but also creates bottlenecks in information flow and decision making.

The real problem is that the boxes and lines of formal organizational charts mask endless relationships in networks and it is these networks define the way work actually gets done in today’s increasingly collaborative, knowledge-intensive companies.

Efficiency is necessary but no longer sufficient. Management models based on planning and predicting instead of resilient adaptation to changing circumstances are no longer suited to today’s challenges. Organizations must be networked, not siloed, in order to succeed. Their goal must shift from efficiency to sustained organizational adaptability. This requires dramatic shifts in mental and organizational models, as well as sustained efforts on the part of leadership to create the environment for such a change.

General McChrystal’s experiences leading the Task Force illustrate how this dramatic transformation is possible in all organizations. After identifying the adaptable and networked nature of Al Qaeda, the general and his team explored why traditional organizations aren’t adaptable. One conclusion they reached was that agility and adaptability are normally limited to small teams. They explored the traits that make small teams adaptable, such as trust, common purpose, shared awareness, and the empowerment of individual members to act.

The primary lesson that emerged, was the need to scale the adaptability and cohesiveness of small teams up to the enterprise level. This involves creating a team of teams to foster cross-silo collaboration. That way the insights and actions of many teams and individuals can be harnessed across the organization. Innovation and problem solving become the products of teamwork, not a single architect.

The new organizational structures they have created can best be called a “Network of Teams”. 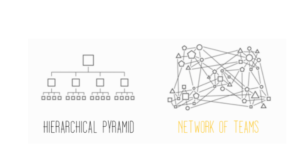 Breaking down silos -From hierarchical pyramids to a network of teams

Tear down the familiar hierarchical pyramid and let the teams be fluid. Allow individuals to gather and work as members of multiple teams with multiple contexts and they will go far beyond the disingenuous ‘dotted line’ nonsense of traditional organizations.
Welcome to a network of teams or a Team of Teams as Gen Stanley addresses this multimodal model.

Spotify says quads and tribes. Finext and Incentro about cells. And FAVI calls them mini-factories

Jean François Zobrist, ex-CEO of FAVI, came up with the idea of a network of mini-factories. A typical mini-factory consists of 20 to 35 operators and solely focuses on one client or one specific product. The mini-factories operate freely within an informal network of factories, without any form of centralized coordination. It’s like an ecosystem of autonomous cells that are always able to find ad hoc solutions to problems that arise from their clients or by the evolution of the market.They are supposed to take up all the responsibilities that a factory would normally take up. Among many things, they decide about salaries, holidays, recruiting, hiring, on-boarding and training. They are in direct contact with the clients and enjoy complete independence in the process. No influence from any kind of management is desired nor allowed.

How a networked organisation works

Team of teams, squads, self-governing teams, self-organizing teams, cells, mini-factories; they all work slightly different but the fundamentals of these networked teams are similar.

Teams and divisions are built up around maximum sizes. Teams are often not allowed to exceed more than 15 people, where their ideal size seems to be between 10 and 15.There must a diverse skill set available within each team to perform all the tasks necessary, which makes the teams highly multidisciplinary. Tasks and responsibilities are evenly divided and based on talents and interests, not on job description or position.

Divisions can often not exceed more than 150 people, based on Dunbar’s number. This is a suggested cognitive limit to the number of people with whom one can maintain stable social relationships—relationships in which an individual knows who each person is and how each person relates to every other person.

Teams are granted lots of operational autonomy within a decentralized structure. The highly autonomous teams, set up like mini businesses, have complete self-control over most aspects of their business and often even over their own profit and loss, with only one underlying principle – should always be in coherence with the purpose and values of the “network” or organization in which they operate.

The good part is that while the individual teams are autonomous, the prudent use of advanced technology keeps them glued. The IT structures stimulate transparency by allowing a fast, efficient and free flow of information about things like goals, projects and feedback.

Aligned to a Shared Purpose

The network of teams are all designed around a clear purpose and a set of core values of the organization. A clear sense of a common purpose keeps the network connected and provides guidance and direction for individuals and teams. It’s like the north star that guides and inspires teams on their mission to success.
However, each team has its own clear focus on one particular thing that distinguishes them from other teams. This thing can be anything like a certain client, (niche) market, product, services, technology, area, or country. When someone within the organization spots a new opportunity, this person is encouraged to create a new team around him or her. Once they have succeeded in setting up a new team, the team has the autonomy to explore and exploit this opportunity.

No team is for ever

Within a Network of Teams, teams are fully responsible for their own results. In most cases, they benefit when their team is doing well but also feel the pain when teams are under performing. When a team is responsible for its own business, and business is not going well, teams can be dissolved. The people either find a new team to join, get others to join their new team, or leave the company. This may sound harsh, although given the current times, it is prudent, agile and effective.