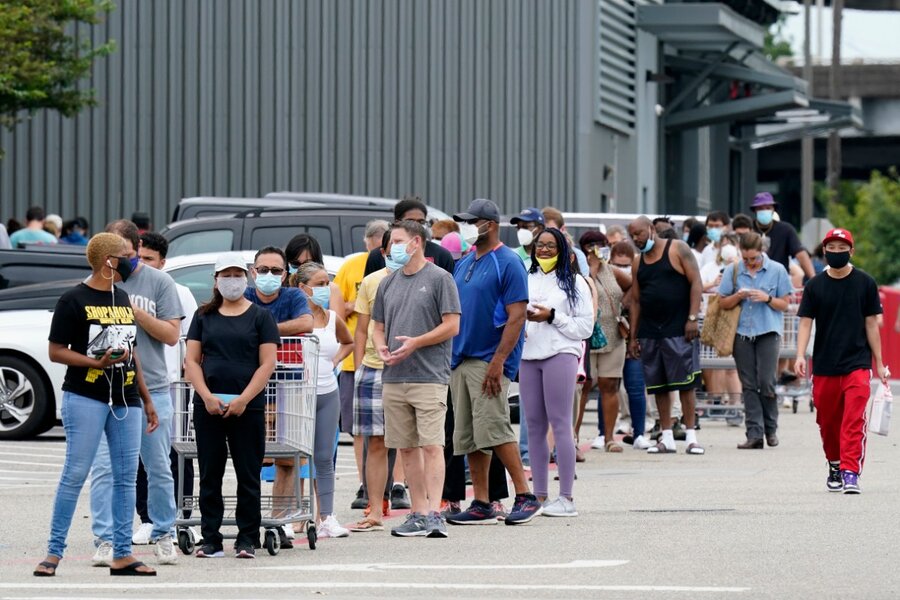 The Gulf Coast braced Sunday for a potentially devastating hit from twin hurricanes as two dangerous storms swirled toward the U.S from the Gulf of Mexico and the Caribbean. Officials feared a history-making onslaught of life-threatening winds and flooding along the coast, stretching from Texas to Alabama.

A storm dubbed Marco grew into a hurricane Sunday as it churned up the Gulf of Mexico toward Louisiana. Another potential hurricane, Tropical Storm Laura, lashed the Dominican Republic and Haiti, and was tracking toward the same region of the U.S. coast, carrying the risk of growing into a far more powerful storm.

Experts said computer models show Laura could make landfall with winds exceeding 110 mph, and rain bands from both storms could bring a combined total of 2 feet of rain to parts of Louisiana and several feet of potentially deadly storm surge.

“There has never been anything we’ve seen like this before, where you can have possibly two hurricanes hitting within miles of each over a 48-hour period,” said Benjamin Schott, meteorologist in charge of the National Weather Service’s Slidell, Louisiana, office.

The combination of the rain and storm surge in a day or two means “you’re looking at a potential for a major flood event that lasts for some time,” said weather service tropical program coordinator Joel Cline. “And that’s not even talking about the wind.’’

Where precisely Marco was headed — and when the storm might arrive — remained elusive Sunday.

The hurricane was initially expected to make landfall Monday, but the National Hurricane Center said that “a major shift” in a majority of their computer models now show the storm stalling off the Louisiana coast for a few days before landing west of New Orleans — and likely weakening before hitting the state. However, skeptical meteorologists at the center were waiting to see if the trends continue before making a dramatic revision in their forecast.

Marco is a small storm that may be pushed westward along the Louisiana coast, delaying landfall but worsening storm surge, Cline said.

The prospect of piggybacked hurricanes was reviving all-too-fresh memories of damage caused by Hurricane Katrina, which struck the Gulf Coast on Aug. 29, 2005. The storm has been blamed for as many as 1,800 deaths and levee breaches in New Orleans led to catastrophic flooding.

“What we know is there’s going to be storm surge from Marco, we know that that water is not going to recede hardly at all before Laura hits, and so we’ve not seen this before and that’s why people need to be paying particular attention,” Louisiana Gov. John Bel Edwards warned at a Sunday briefing.

Along the main drag on the barrier island of Grand Isle, south of New Orleans, Starfish Restaurant manager Nicole Fantiny could see an exodus of people driving off the island.

“They are all packing up and leaving,” she said.

Fantiny wasn’t planning to leave, at least for Marco, but she was anxious about the possible one-two punch from both storms. Her husband works with the town’s fire and police departments, so she said they are always among the last ones to leave.

Marco is expected to dance above and below hurricane status after hitting the 75 mph-wind mark Sunday afternoon.

“The central Gulf could be really under the gun between Marco and Laura in back-to-back succession,’’ said Colorado State University hurricane researcher Phil Klotzbach. “Certainly both of these storms can impact New Orleans significantly. It just remains to be seen if the track for Laura tracks a bit to the west.”

University of Miami hurricane researcher Brian McNoldy warned that anyone in New Orleans should be alarmed by the threat. At issue from possible dual hits: whether the levee system can withstand the stress, he said.

In New Orleans, the city’s aging drainage system has been a particular point of concern in recent years after an intense 2017 storm flooded streets and raised questions about the system’s viability.