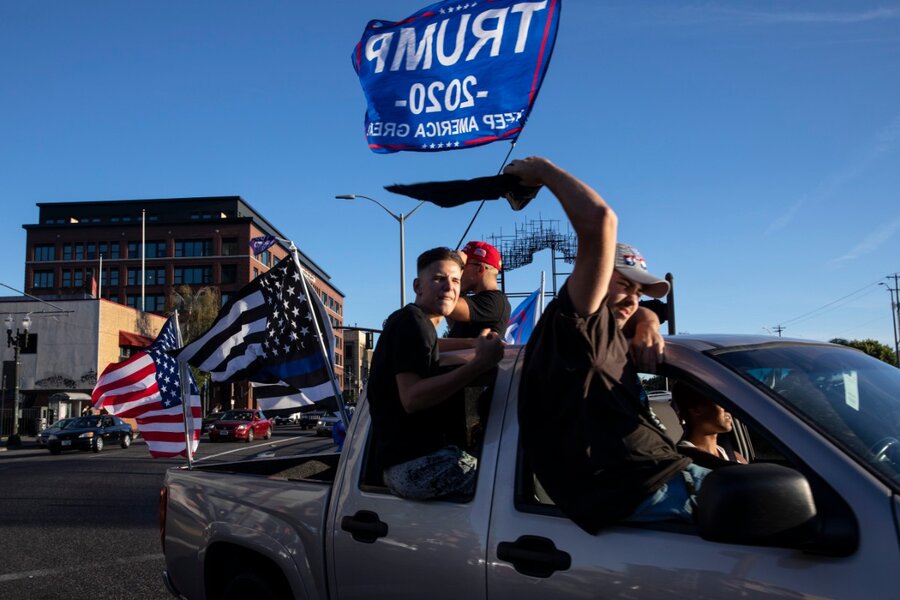 Democrats on Sunday accused President Donald Trump of trying to inflame racial tensions and incite violence to benefit his campaign as he praised supporters who clashed with protesters in Portland, Oregon, where one man died overnight, and announced he will travel to Kenosha, Wisconsin, amid anger over the shooting of another Black man by police.

Mr. Trump unleashed a flurry of tweets and retweets the day after a man identified as a supporter of a right-wing group was shot and killed in Portland, where a large caravan of Trump supporters and Black Lives Matter protesters clashed in the city’s streets. Trump praised the caravan participants as “GREAT PATRIOTS!” and retweeted what appeared to be the dead man’s name along with a message to “Rest in peace.”

Trump also retweeted those who blamed the city’s Democratic mayor for the death.

“The people of Portland, like all other cities & parts of our great Country, want Law & Order,” Trump later tweeted. “The Radical Left Democrat Mayors, like the dummy running Portland, or the guy right now in his basement unwilling to lead or even speak out against crime, will never be able to do it!”

Trump has throughout the summer cast American cities as under siege by violence and lawlessness, despite the fact that most of the demonstrations against racial injustice have been largely peaceful. With about nine weeks until Election Day, some of his advisers see an aggressive “law and order” message as the best way for the president to turn voters against his Democratic rival, Joe Biden, and regain the support of suburban voters, particularly women, who have abandoned him. But Democrats accuse Trump of rooting for unrest and trying to stoke further violence for political gain instead of seeking to ratchet down tensions.

“He may think that war in our streets is good for his reelection chances, but that is not presidential leadership — or even basic human compassion,” Mr. Biden said in a statement responding to the shooting, in which he “unequivocally” condemned violence on all side, while accusing Trump of “recklessly encouraging” it.

“Do you seriously wonder, Mr. President, why this is the first time in decades that America has seen this level of violence?” he asked at a televised news conference. “It’s you who have created the hate and the division.”

Trump, who appeared to be watching, responded with real-time tweets labeling Wheeler a “wacky Radical Left Do Nothing Democrat.”

After a reporter told Wheeler about the tweet, the mayor shot back, “I’d appreciate that the president support us or stay the hell out of the way.”

Trump has cast the upcoming election as clash between “law and order” and anarchy, and he has denounced protesters as “thugs” while sharply defending police. That theme was front-and-center at last week’s Republican National Convention, which used recent protest footage to paint a foreboding and violent picture of the future if Biden denies Trump a second term.

Trump is expected to continue to hit that theme when he travels Tuesday to Kenosha, Wisconsin, where tensions are still raw after police shot Jacob Blake, a 29-year-old Black man, in the back seven times, leaving him paralyzed. The shooting has ignited new demonstrations against racial injustice and police brutality months after George Floyd’s death at the hands of a Minneapolis police officer touched off a wider reckoning on race.

Trump will be meeting with law enforcement officers and “surveying” the damage in the city, where businesses have been vandalized and some buildings burned during demonstrations, White House spokesman Judd Deere announced.

But Wisconsin Gov. Tony Evers, a Democrat, asked Trump to reconsider in a letter Sunday.