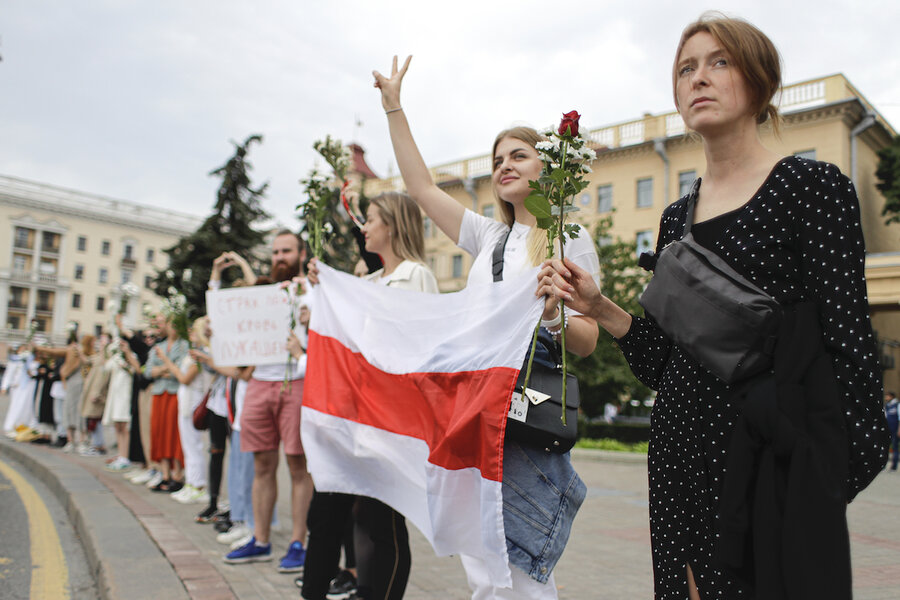 Belarusian authorities on Thursday opened a criminal probe against opposition activists who set up a council to negotiate the transition of power amid massive protests challenging the extension of the 26-year rule of the country’s authoritarian leader in a vote the opposition saw as rigged.

President Alexander Lukashenko has dismissed the protesters as Western puppets and threatened opposition leaders with criminal charges. Following up on his statement, the prosecutors opened a criminal investigation against the opposition activists on charges of undermining national security, and a leading opposition figure reported being threatened with arrest.

The Belarusian leader dismissed the European Union’s criticism of the Aug. 9 vote and told its leaders to mind their own business.

The EU’s leaders on Wednesday expressed solidarity with protesters and rejected the official results of the election that showed Mr. Lukashenko won 80% of the vote. The EU said it’s preparing sanctions against Belarusian officials responsible for the brutal post-election police actions.

The crackdown fueled massive outrage and swelled protesters’ ranks, forcing authorities to change tactics and stop breaking up crowds that grew to an unprecedented 200,000 on Sunday.

Protests continued Thursday in Minsk and other Belarusian cities for the 12th straight day.

After standing back for days, police again beefed up their presence on the streets of the Belarusian capital Wednesday, blocking access to some government buildings and also deploying in numbers outside major factories where workers have been on strike since Monday.

The industrial action that has engulfed major factories across the country cast a tough challenge to Mr. Lukashenko, who had relied on blue-collar workers as his core support base.

In a bid to stop the strike from spreading, Mr. Lukashenko on Wednesday said that the participants would face dismissal and ordered law enforcement agencies to protect factory managers from the opposition pressure.

In another new challenge to Mr. Lukashenko, hundreds of employees of state television have gone on strike amid a rising tide of protests, calling for his resignation after a vote the opposition saw as rigged.

The journalists’ action this week has shaken the government’s control of the media, helping further erode Mr. Lukashenko’s grip on power.

Vyacheslav Lomonosov, one of the Belarusian TV employees who joined the labor action, said he and his colleagues could no longer tolerate an official ban on reporting the truth about a brutal crackdown on protests that has stoked international outrage.

“There are people killed, raped, thousands are protesting, while they’re saying everything’s fine in the country and nothing is going on,” he said. “It can’t be like that, people need to get the truth from TV.”

The walkout of about 300 employees of Belarusian state TV has dealt a particularly painful blow to the Belarusian leader, who has relentlessly stifled independent media since coming to power in 1994 and relied on state-controlled television and other media to shape public opinion.

The state television workers were joined by journalists from the leading daily Zvyazda, who put out a statement demanding an end to censorship.

Facing the massive protests, the government has sought to tighten controls over information.

In the first four days of protests after the vote, police deliberately targeted journalists from independent Belarusian news outlets and foreign media, detaining scores, beating some of them, damaging their equipment, and seizing memory cards.

Boris Goretsky, vice-president of the Belarusian Association of Journalists, said 72 journalists were detained while covering the protests.

He said that the authorities have blocked many online independent news media and denied accreditation to hundreds of foreign journalists, who have been eager to come to the country to cover the protests.