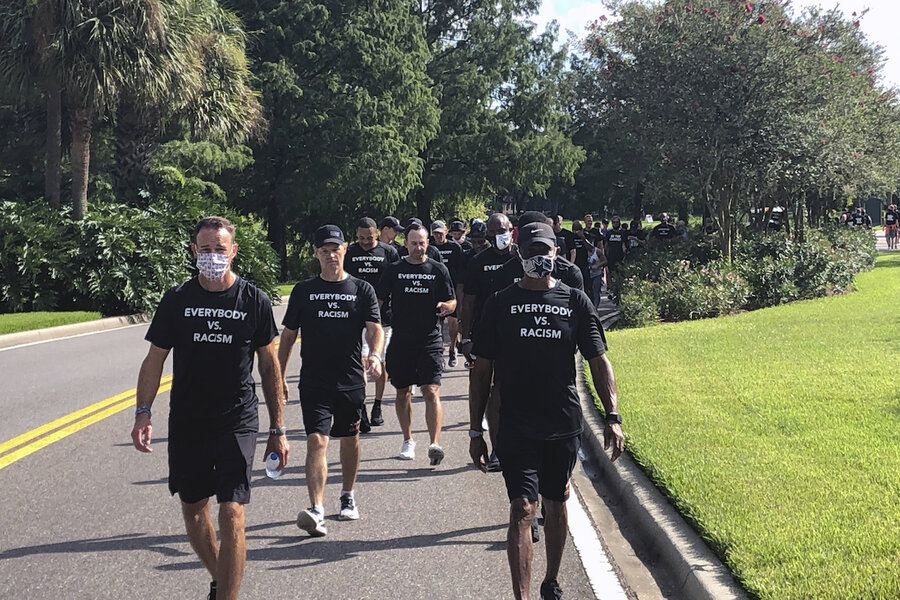 An unprecedented NBA walkout over racial injustice postponed a second day of the playoffs Thursday, although players pledged to finish the postseason even as they wrestled with their emotions about wanting to bring change in their communities.

For now, the basketball courts in the NBA’s virus-free bubble at Disney World remained empty. And other athletes across the sports world also said they weren’t ready to resume playing.

They are still angry and emotional after the shooting of Jacob Blake, a Black man, by police in Kenosha, Wisconsin. NBA players considered not playing again the rest of the postseason and going home to their communities, but decided Thursday they wanted to continue, according to a person with knowledge of the details. The person spoke on condition of anonymity because no official announcement had been made.

“It’s obviously not easy, given everything that’s going on. But I think that if we can go out there and do our best and also have a list of things that we want to accomplish, everything gets completed.”

A second night of WNBA games were postponed and other teams and sports pondered whether they would play on.

“This is not a strike. This is not a boycott. This is affirmatively a day of reflection, a day of informed action and mobilization,” WNBA players’ union president Nneka Ogwumike said on ESPN.

The NBA’s relationship with the White House eroded when Donald Trump was elected; President Barack Obama was close with some players and officials. Mr. Trump was critical of the league again Thursday.

“They’ve become like a political organization, and that’s not a good thing,” Mr. Trump told reporters, noting that the league’s ratings are down from previous seasons. “I don’t think that’s a good thing for sports or for the country.”

Earlier Thursday, Vice President Mike Pence’s chief of staff Marc Short said in a CNN interview that the NBA protests are “absurd and silly” when compared to their response to ongoing human rights violations in China.

But athletes from other major professional sports also say the moment has forced them to act. Here’s a look at what they are doing to call for an end to racial injustice:

Major League Baseball: Seven games were postponed Thursday, a day after three games were called off.

“In this world, I’ve always believed, there’s two things you can’t live without. It has nothing to do with food and water. It’s love and hope. And I don’t think we’re doing a good job in our country giving that to everyone and I think that needs to be the focus here,” Philadelphia Phillies manager Joe Girardi said.

National Hockey League: Announced Thursday that it postponed two days of playoff games. The league’s games went on as scheduled Wednesday. San Jose Sharks forward Evander Kane, who is Black, was vocal about the issue on Twitter, saying it would send “a clear message that human rights take priority over sports.”

Golf: The PGA Tour event at Olympia Fields outside Chicago – less than 100 miles from Kenosha, Wisconsin – went on as scheduled Thursday. Cameron Champ, who has a Black father and a white mother, wore a black shoe and a white shoe. On the white shoe he wrote: “Jacob Blake BLM.” The LPGA Tour is set to begin play Friday in Rogers, Arkansas.

Tennis: Naomi Osaka will play in the Western & Southern Open semifinals, after all. A day after saying she would withdraw from the hard-court event to protest the “continued genocide of Black people at the hand of the police” – prompting the tournament to call off all of Thursday’s matches – the two-time Grand Slam champion and former No. 1-ranked player changed course. Her agent confirmed that Ms. Osaka will face No. 14 Elise Mertens when play resumes at the tournament Friday with the semifinals. The finals were shifted from Friday to Saturday.