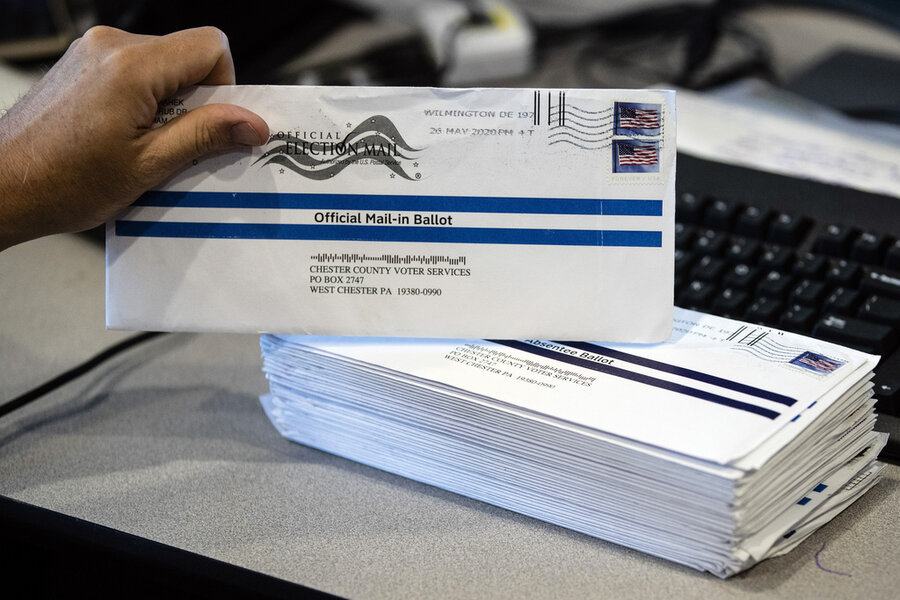 Since the early 20th century, the United States has defended and promoted democracy around the world. It has emphasized free and fair elections as necessary to economic development and legitimate government. Now the U.S. faces its own questions of legitimacy just weeks before voters head to the polls to elect a new Congress and decide who will occupy the Oval Office.

President Donald Trump and Democratic nominee Joe Biden have both expressed doubts that the election will be fair. Intelligence assessments indicate Russia, China, and Iran might be sowing doubts about the voting process. And the pandemic has created an unprecedented need for alternatives to in-person voting.

These concerns have registered with many Americans. Their doubts are reflected in how they would perceive a negative result for their preferred candidate. Polls conducted by two groups, the Campaign Legal Center and Protect Democracy, found that 2 in 5 Republicans planning to vote for Mr. Trump said if Mr. Biden wins it will be because the vote was somehow rigged. Among Democrats planning to vote for Mr. Biden, 2 in 3 say a Trump win would be because of vote suppression and/or foreign meddling.

But here’s how those worries can translate into action: A majority of voters on both sides say state and local governments should allocate more money to ensure the ballot process is credible. Without broad acceptance of the ballot count, elected leaders will find it harder to govern.

There are reasons for calm. According to Jess Marsden, a specialist in election law at Protect Democracy, the average level of experience among election officials nationwide is seven elections.

“These people aren’t partisan hacks,” he told The Atlantic. “They’re serious professionals working at the state and local level. If they say the results are legitimate, that means a lot.”

More than 900,000 poll workers helped out in the 2016 presidential election. In a 2018 survey of local election officials by the Democracy Fund, most said it has become easier for people to register and vote, and easier to administer the registration and voting process.

The U.S. can build on this high level of civic neutrality by those involved in the voting process. This nonpartisan service has a long history.

This week, Pennsylvania, a swing state, set a new standard of credibility by mandating that all votes must be counted regardless of how they were cast or how long it takes. That follows a 2019 state law enabling voters to vote by mail without conditions. This is progress in a year when millions more Americans are expected to cast ballots by mail.

One of the best safeguards for free and fair voting, however, may already be in place. This summer, young voting-age Americans demonstrated the most vigorous civic activism in half a century. They are deeply engaged on issues, left and right, through social media. They are watching how states conduct the election. In the 2018 midterm elections, their participation surged at the ballot box. That political activism coincides with recent activism in many other places around the world, such as Belarus, India, Hong Kong, and Chile.

America’s best defense of democracy is by ensuring its own citizens can vote and that their vote is counted. The most available antidote to public doubt is the exercise of individual agency – registering to vote and following through by voting. And by supporting the integrity of local polling, a people who are “created equal” can have more confidence in the equality of the ballot box and voting from home.