On a white board in his office earlier this year, Trump trade adviser Peter Navarro made a list of potential companies that could manufacture pharmaceuticals in the U.S.

He separated them into three columns, one for each stage of the production process. Eastman Kodak Co. KODK -7.83% stood out, overlapping two of the three columns. The way Mr. Navarro saw it, he recalled, Kodak could help produce the ingredients to jump-start generic drug production and ease the country’s reliance on foreign supplies.

When a proposed $765 million contract was made public in late July between Kodak and the federal government, investors and lawmakers had questions, chief among them: Why pick Kodak, a struggling photography company?

Many of the answers point back to Mr. Navarro, who spearheaded the idea and then used his sway within the administration to help Kodak navigate the bureaucracy to be first in line for the potential contract, including tapping an obscure government agency to help push the loan through the final stages.

The deal came together in “Trump time,” Mr. Navarro said when it was announced, using a phrase he likes to describe speed.

Today, the arrangement is on life support and Mr. Navarro is distancing himself from it. Under pressure, Kodak rushed out an announcement before it was finalized, according to a person familiar with the company. The company bungled its release to local media, sending Kodak’s stock on a roller coaster. The Securities and Exchange Commission is investigating how the company disclosed the loan and congressional committees are probing.

In an interview, Mr. Navarro said, “we did everything right in moving the project forward but something on Kodak’s end appears to have gone wrong.” He said his work was part of a “much broader effort” in which the administration is evaluating more than 30 new potential drug manufacturers.

In a recent CNBC appearance he said, “What happened at Kodak was probably the dumbest decisions made by executives in corporate history.”

A Kodak spokeswoman, Arielle Patrick, said the company explored federal support for Kodak and its workers “as well as opportunities to assist the government, on the state and federal level, in response to the pandemic.” She said Kodak continues to cooperate with all regulatory and congressional inquiries.

“ We have “more than 30 projects we’re looking at but Kodak is a giant among them — a great win for the American people.” ”

“ “What happened at Kodak was probably the dumbest decisions made by executives in corporate history.” ”

Mr. Navarro, 71, is one of the longest-serving members of the administration, outlasting rivals who chafed at his hard-driving nature, according to current and former colleagues. A former economics professor in California, Mr. Navarro is known for his focus on China and has pushed for steep tariffs.

The president, whose instincts often align with Mr. Navarro, sometimes seeks his counsel by calling out, “Where’s my Peter?”

When the pandemic struck, Mr. Navarro gained new powers after the president chose him to oversee use of the Defense Production Act. The Korean War-era law gives the government power to force businesses to divert production capacity in the name of a national emergency. Mr. Navarro coordinated directly with companies to marshal equipment such as testing swabs and N95 masks, which have been in short supply.

One of his largest tasks, however, has been to shore up drug manufacturing in the U.S., a task he calls “a life-or-death mission.”

“We have already witnessed over 80 countries impose some form of export restrictions on medicines or medical supplies, proving that no matter how strong our friendships or alliances may be, they mean nothing in a pandemic. It’s ‘Lord of the Flies,’” Mr. Navarro said. Examples include acetaminophen, a common pain killer.

Kodak wound up on Mr. Navarro’s white board based on a recommendation from another U.S. pharmaceutical company that was in discussions with Kodak about purchasing drug ingredients, according to a person familiar with Mr. Navarro. Administration officials declined to identify that company. 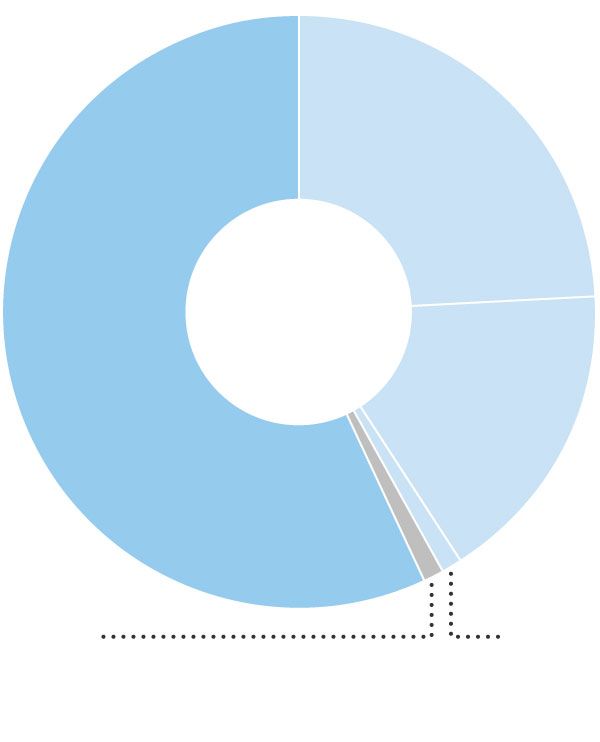 While Kodak is synonymous with photography, the Rochester, N.Y., company has a smaller unit that manufactures ingredients for pharmaceuticals.

Kodak was struggling financially before the pandemic. The company said at the start of 2020 it expected to cut its expenses by $40 million over the course of the year. By May, with the pandemic inflicting further harm, Kodak executives decided to trim an additional $20 million.

“Kodak is ineligible for most government” aid, the company’s chief financial officer David Bullwinkle warned on a May 12 earnings call. Still, he said, “Kodak will continue to monitor for any new government relief programs.”

Kodak Executive Chairman and Chief Executive Jim Continenza added: “Any government advantages in the programs, we will try to take advantage of.”

Kodak boosted its lobbying, spending about $870,000 in the second quarter, up from almost zero for the prior two years, according to the Center for Responsive Politics, a nonprofit that tracks lobbying spending. That amount marked the most money the company has spent on lobbying since 2010.

Kodak employees reached out to the White House, Department of Health and Human Services and the U.S. International Development Finance Corp., the agency charged with making loans to businesses in the wake of the pandemic under the Defense Production Act, according to lobbying disclosure reports.

Mr. Navarro said, “the swamp has no sway in my office.”

Was Kodak the right choice to kick start domestic drug production? Join the conversation below.

The DFC was an unusual choice to manage such a program. Typically the agency makes loans in the developing world, but in May was given license to support Covid-19 response.

The agency has worked on projects around the world, including an initiative to back women entrepreneurs in Africa with the help of Ivanka Trump, the president’s daughter.

Adam Boehler, the head of the agency, describes the DFC as a bank, providing loans to projects in the government’s interest. Before Kodak, the DFC had never before financed a U.S. company for an entirely domestic initiative. Senior administration officials said choosing the DFC made sense because of the agency’s financing knowledge.

Kodak fanned out across Washington at about the same time Mr. Navarro, Mr. Boehler and Health and Human Services Secretary Alex Azar were debating lessons learned from the country’s battle with the virus.

One takeaway was the country’s reliance on foreign generic drugmakers, according to an official familiar with the matter. Mr. Navarro asked his staff to find companies that could help address the problem.

Every Monday, administration officials convene a meeting with other government agencies to discuss the country’s Strategic National Stockpile, the U.S. repository of vaccines and other critical medical supplies.

At the end of one of the meetings in May, Christopher Abbott, an aide to Mr. Navarro, pitched Kodak to David Glaccum, the DFC’s counsel, according to senior administration officials.

Mr. Abbott asked if the DFC would be interested in looking at a pharmaceutical project, one of the officials recalled. Mr. Glaccum responded affirmatively, realizing working with Kodak could be part of an executive order that the president had signed a few weeks earlier.

Mr. Navarro’s office connected Kodak’s leadership with the DFC in early June. Mr. Glaccum conducted pre-screening calls with Kodak and told the company to formally apply to the DFC’s newly announced program, according to a senior administration official.

In June, Kodak submitted a 17-page financial model code-named “Project Tiger” and a 96-page business plan, according to a person familiar with Kodak. There were no other applicants, according to a senior administration official.

The White House planned to announce the loan July 28, even though it wouldn’t be finalized for months—perhaps not until after the November election.

Privately, some Kodak executives harbored concerns about the timetable. When they shared those worries with DFC, officials there were adamant the event take place as planned, according to a person familiar with Kodak.

A DFC loan officer had visited Kodak’s Rochester headquarters for the first time just six days before the planned announcement, and the visit wasn’t a full vetting of the company, according to people familiar with the visit.

Some Kodak’s executives concluded they had little choice in the matter, according to one of those people. Senior administration officials deny the DFC pressured Kodak to announce the loan and said Kodak was supportive of the announcement.

A DFC spokeswoman said the agency “followed its standard process, under its standard timeline, driven by career finance professionals.” Mr. Navarro said no one from Kodak told him the process was rushed.

Elizabeth Littlefield, the head of the DFC’s predecessor agency during the Obama administration, said she was concerned that Kodak wasn’t able to raise money without government help, and why the DFC touted the deal before it was final. 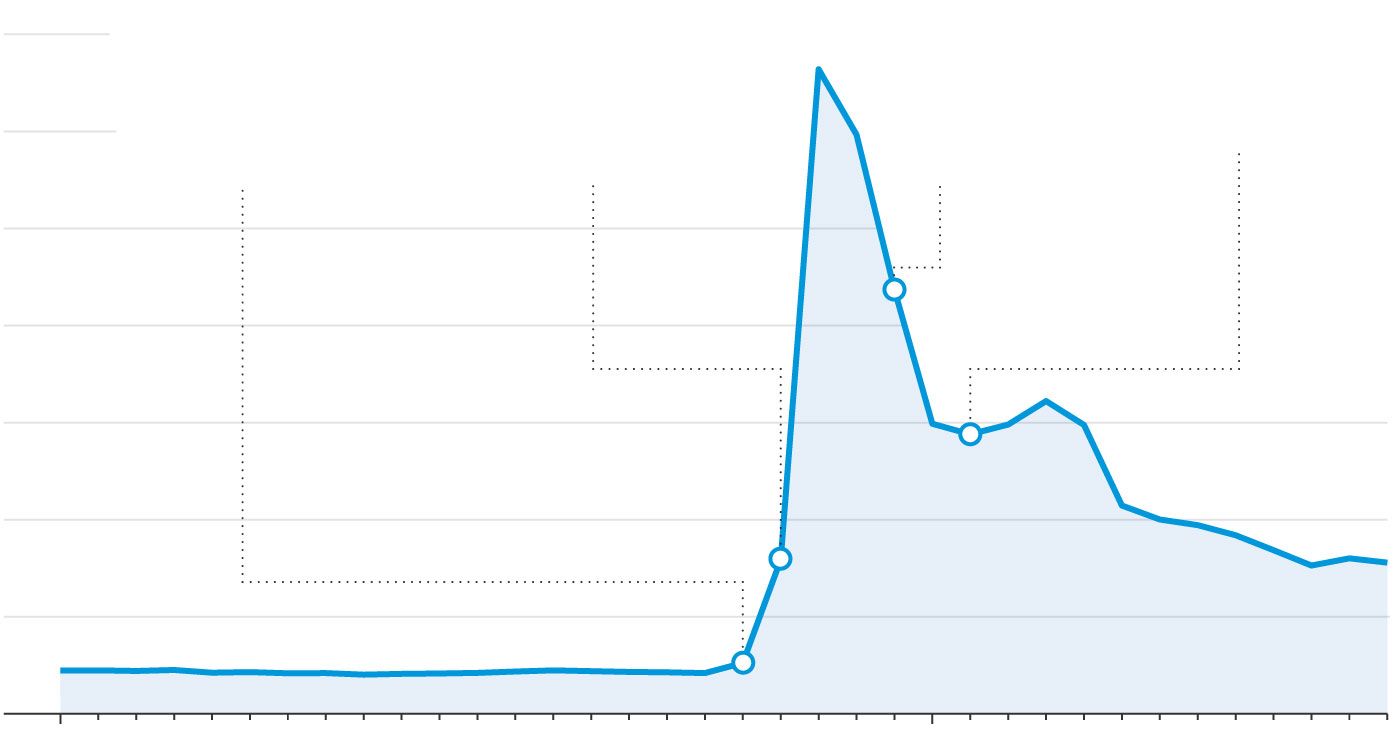 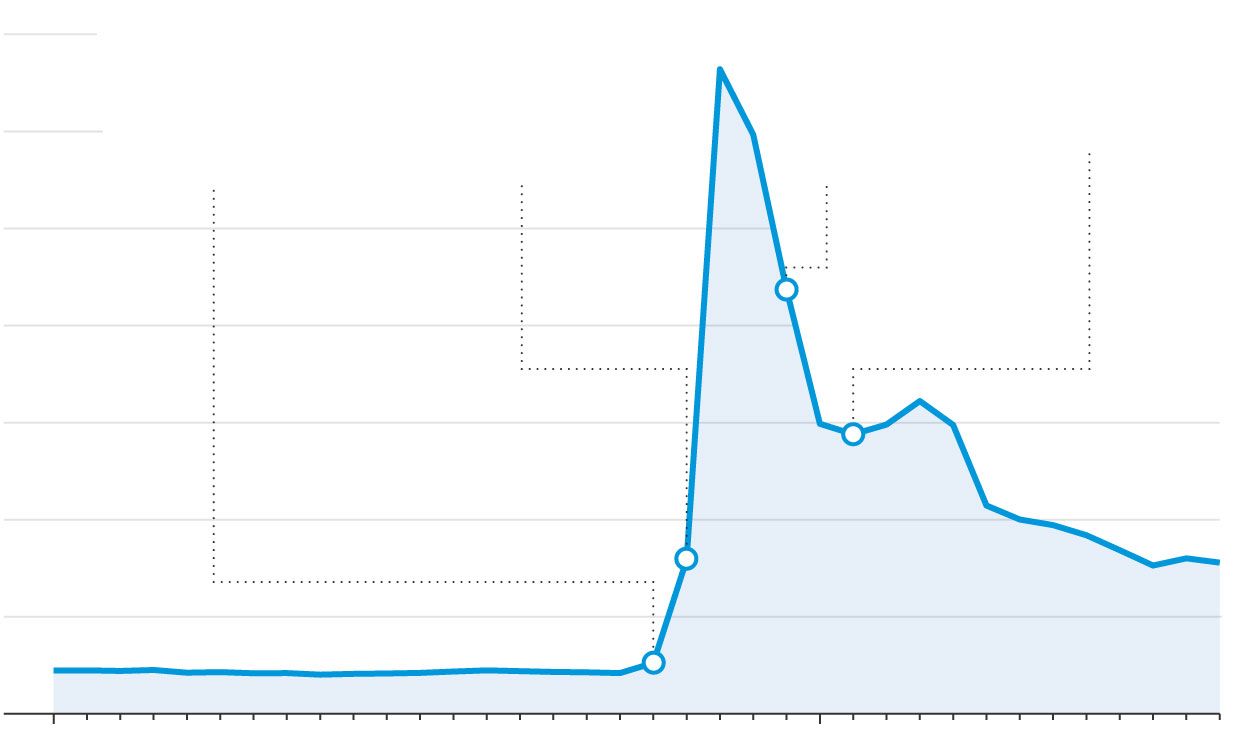 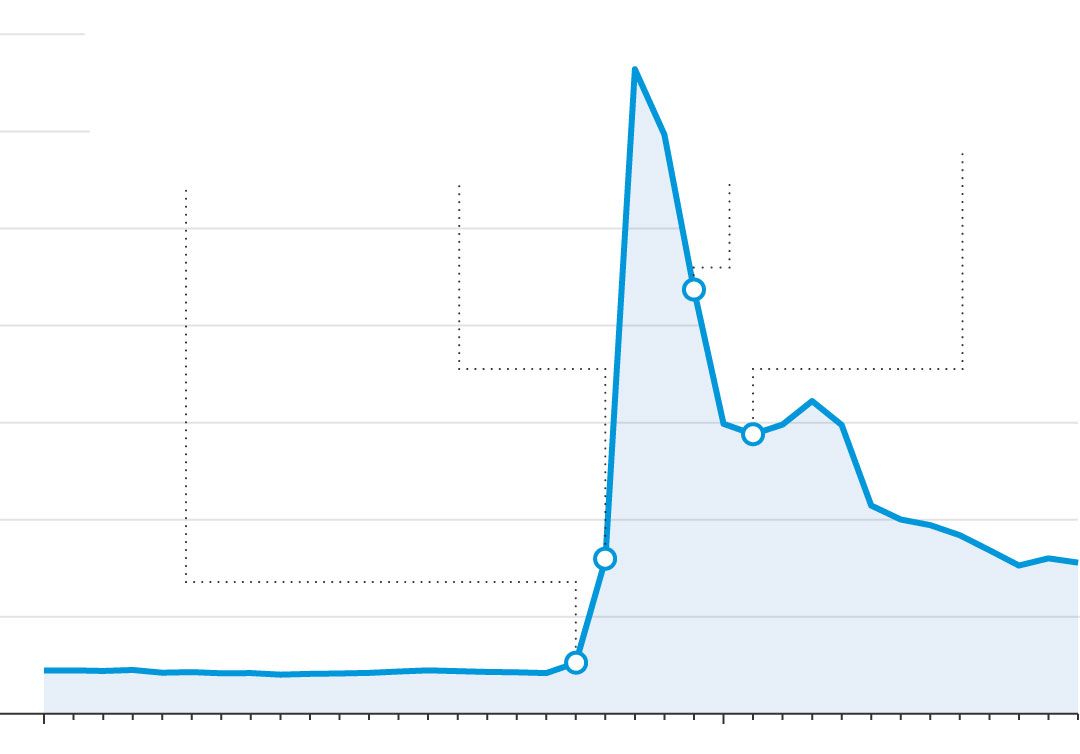 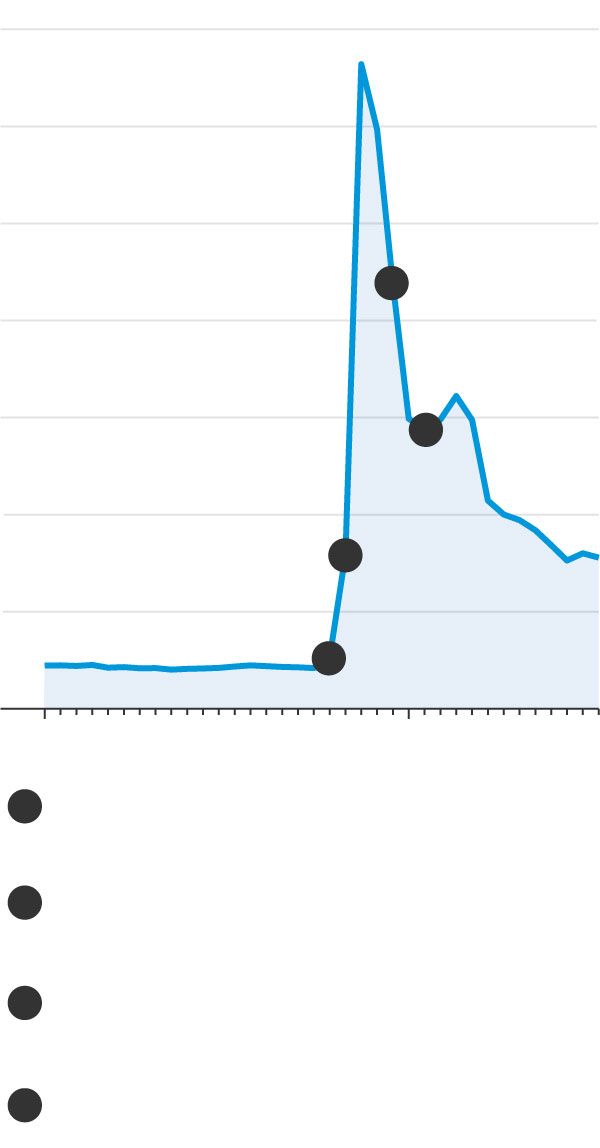 Kodak and the Trump administration announce the loan

Articles published about options grants given to Kodak’s CEO

“It’s pretty unusual to have such fanfare for just [a letter of intent], for such an early stage in the process,” she said.

On the day it was announced, President Trump called the proposed loan “one of the most important deals in the history of U.S. pharmaceutical industries. My administration has reached a historic agreement with a great American company.”

A misworded early alert about the loan sent the day before to local media sent Kodak’s stock price on a roller-coaster ride. It rose from around $2 on July 27 to $60 in just a few days. It then collapsed over the following week as it became clear to investors the deal was far from done. Mr. Navarro said the administration made clear that the deal wasn’t final.

The White House and DFC have put the Kodak deal on hold, amid the probes by the SEC and Democratic congressional committees. The SEC is looking at how Kodak disclosed the loan and stock-option grants to executives. Lawmakers are examining the loan process and the options grants awarded some executives, including Mr. Continenza, Kodak’s executive chairman. A Kodak spokeswoman said he has never sold Kodak stock during his time at the company.

Kodak has hired a law firm to conduct a review, also looking at a record-setting tax deductible donation by George Karfunkel, a board member who donated shares to a Brooklyn synagogue.

Mr. Karfunkel didn’t respond to a request for comment. The Kodak spokeswoman declined to comment. Directors of publicly traded companies can buy and sell shares without discussing it with the company or other board members.

Write to Rachael Levy at rachael.levy@wsj.com, Geoffrey Rogow at geoffrey.rogow@wsj.com and Alex Leary at alex.leary@wsj.com