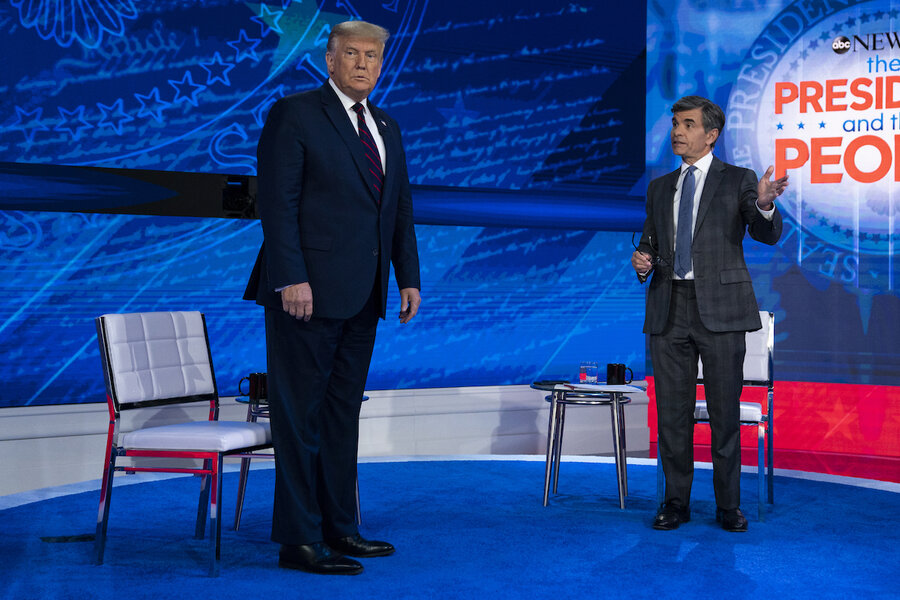 President Donald Trump points to spiking crime and delivers stark statistics on murders and shootings as part of his “law and order” campaign emphasis that suggests cities are overrun with violence that only he can stop.

Several cities have seen a sobering surge in murders this summer, but those numbers are only a small snapshot of crime in the United States, and his strategy is highlighting how data can be easily molded to suit the moment.

At a televised town hall event Tuesday for undecided voters in Pennsylvania, Mr. Trump spoke about how he believed crime was soaring in cities after nationwide protests against police brutality. He has tried to link the violence to the protests, and is trying to leverage the violence to scare white, suburban voters and encourage them to back his reelection campaign.

Mr. Trump may have been talking about shootings. They are up in New York by about 86% so far this year, but overall, crime is down about 2%, and there are about 34,000 uniformed officers, about the same as in recent years. Murders are up 35%, but there were 305 killings compared with 226, still low compared with years past.

Other major cities have also seen a recent spike in violence, but the vast majority is neither linked directly to the protests nor is it moving to typically lower-crime areas, said Rick Rosenfeld, a University of Missouri criminologist.

And violence often rises in the summer and drops in colder months.

“It is correct for people to not only draw attention but to be quite concerned about the uptick in violence, but at this point there is no evidence to claim the protests have somehow generated that uptick,” Mr. Rosenfeld said.

Overall, the nation’s crime rate has been falling for decades. It’s not yet clear whether the recent increase is a troubling trend or a tragic but brief part of the nearly unprecedented times.

A preliminary FBI report released Tuesday on national crime found that while the number of murders was up over the past six months, decreases in rapes and robberies meant violent crime was down overall, especially in smaller towns. The data is from information voluntarily given by law enforcement agencies around the country. Final crime report data hasn’t been released by the FBI since 2018, and the bureau always cautions against geographic comparisons.

Still, the general sense of anxiety pervading the country can make people feel less safe even if the data indicates they’re not in any more danger.

“Because that level of unpredictability has entered our daily lives, it has ratcheted up fear across the board,” said research scholar Meghan Hollis with the Ronin Institute, an independent scholarly research group. She has studied how much people believe they’re at risk from crime. “Unfortunately, I think people are seizing on an environment of fear right now that’s pervading in all aspects of our lives to discuss potential risk that may or may not be there.”

She cautions against drawing any kind of conclusions about crime this year.

“There’s just a lot of challenges we’re facing right now in comparing around the country, comparing trend lines over time. You have to be so careful right now, because it might not be accurate,” she said. Meanwhile, full census data is nearly a decade old, making it harder to tell if crime is increasing in frequency or simply happening more because there are more people in certain cities.

Broad statements about crime in the U.S. are also tricky because there are 18,000 police departments across the country and no single central records-management system, said University of Miami criminology professor Alex Piquero.

Some departments track crime weekly. Others quarterly. Some annually. Some report their data to the FBI, others don’t.
“We don’t have anything standard in terms of record-keeping,” he said.

Police are also dealing with the coronavirus themselves. Many officers have caught the virus, and hundreds have died. Others have quarantined, leaving fewer police out to patrol the streets, said Mr. Rosenfeld.

His analysis of 27 cities found that homicides and aggravated assaults grew by about 35% between late May and June. Most of those happened in neighborhoods long roiled by violence and hit hard by the pandemic and recession, he said.

But violence in some places such as Chicago leveled off later in the summer, he said. There have been both state and federal crackdowns on the violence.

The timing of the spike he found does coincide with the protests in the wake of George Floyd’s death, but his research shows most of the crime happened away from the demonstrations. There was a spike in commercial burglary at the end of May, just as the protests started, but it lasted just a week.

Rather, Mr. Rosenfeld believes the instances of police violence and the significant attention they generate may be exacerbating a breakdown in trust between police and the communities they serve.

“Police legitimacy suffers, that is confidence and trust in the police,” he said. “If that drops enough, a space, a void opens between the community and the police … and street justice fills that void.”