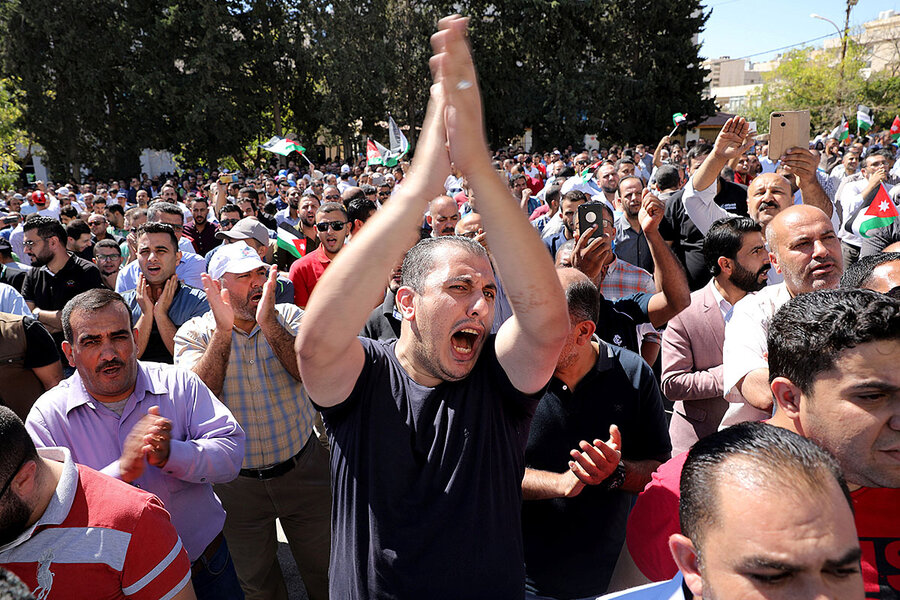 Jordan had “crushed” the curve. To take the country’s coronavirus cases from dozens a day to zero, Jordanians diligently followed government guidelines and quietly coped with the mounting economic costs. Jordan’s economy saw a smooth reopening in late June.

It was amid this positive atmosphere that Jordan’s teachers, whose average salary is below the country’s poverty line, demanded that the government live up to a $50 to $70 monthly raise first promised in 2013 and set to kick in this fall.

The government response was harsh. The teachers union’s leadership council was dissolved. Union leaders and teachers were arrested. A gag order was issued blocking media from discussing the issue. Cellphone footage of clubbings and knee-to-the-throat arrests is circulating on social media, pushing citizens to side with the teachers’ demands.

Support for coronavirus efforts is waning. The government has cited the pandemic as the reason to increase police presence across the country and threatened a renewed lockdown if case levels remain high. Citizens are voicing suspicions that Amman is manipulating coronavirus statistics for its political needs.

“Everywhere people no longer believe the government’s stats or statements on corona. They think it is a conspiracy,” says Oraib Rantawi, a researcher. “The government has lost all this credit and goodwill for nothing.”

When he first insisted on his $60 a month raise in July, Omar did not expect to wind up in a jail cell.

The Jordanian public-school teacher, who makes $450 a month, says he thought that with the country recovering from its pandemic lockdown, getting paid the raise granted by the government last year was a just, and unremarkable, demand.

Now, with his teachers union dissolved, colleagues arrested or on the run, and daily protests growing amid a violent government crackdown, he is left wondering how the issue of teachers’ salaries could have rapidly pushed his country to the brink.

Editor’s note: As a public service, all our coronavirus coverage is free. No paywall.

As the union-government showdown escalates into a bitter nationwide struggle over speech freedoms and the right to protest, there are signs that the Jordanian state’s old way of doing business can no longer quell discontent, and risks harming its coronavirus response.

“Things are growing and escalating by the day,” Omar (his full name and others in this story are known to the Monitor) says over a secure messaging app, four days after his detention and release for participating in a protest in the northern Jordanian city of Irbid in the face of “unprecedented” force by anti-riot police.

“These actions may aggravate matters, and it is all becoming a mess; but our demands are just, and we will not back down.”

The teachers union crisis has been a sudden twist of fate for Jordan, which had emerged relatively unscathed as a COVID-19 success story.

A three-month lockdown imposed in early March – among measures implemented by a government given broad emergency powers to keep businesses afloat and citizens at home – helped Jordan “crush” the curve. Jordanians diligently followed government guidelines and quietly coped with the mounting economic costs. After dozens of new coronavirus cases per day came multiple weeks of no new daily cases and a total of 10 deaths.

With a smooth reopening in late June, Jordan avoided the protests and unrest over lockdowns and joblessness that hit European countries and neighboring Israel. Jordan’s pharmaceutical sector was positioned to produce regional batches of a future vaccine. The country began exporting personal protective equipment.

It was amid this positive atmosphere that the teachers union demanded that the government live up to a raise – calculated according to years of service and their starting base salary – first promised in 2013 and set to kick in this fall.

When the government refused to negotiate, citing a March order freezing all public-sector salaries, the union published a call for activism on its website for the raises to be honored.

The government response was as swift as it was harsh, a shocking assault on civil society in a kingdom that has allowed professional unions relative freedom for decades.

On July 25, the attorney general ordered the union’s leadership council dissolved and shuttered union headquarters – a move that has no judicial basis in Jordanian law. Police raided the homes and offices of union leaders across the country, arresting them and putting them in pretrial detention, often without warrants.

A dozen union leaders are on a hunger strike in its 19th day. Two were rushed to the hospital Thursday for emergency care.

The government’s response is reminiscent of previous crackdowns on economic protests in the 1980s and ’90s, some here say. Yet hundreds of Jordanian citizens are gathering in near-nightly protests in support of teachers in towns across the kingdom, defying emergency orders restricting large gatherings.

Observers say the sudden government crackdown may be rooted in a desire to prevent wider economic protests at a time of budgetary stress and recession.

To be sure, the government’s financial resources are especially meager, with Jordan’s deep-pocketed Gulf Arab neighbors also feeling the effects of the coronavirus-fueled recession. It’s an economic climate that also has robbed teachers of vital supplementary sources of income in the form of home-based businesses.

With each side surprised at the other’s intransigence and convinced it can win a battle of wills, the showdown has led to rapid escalations neither was anticipating.

With more than 100,000 members, the teachers union is the largest civil society group in the kingdom with potential large political sway.

It first showed its strength last September, when a four-week strike forced the government to put the previously promised monthly raises of $50 to $70 in the 2020-21 school year budget. Teachers earn average wages of $600 per month, below the government-acknowledged poverty line of $880.

“When the union started to organize sit-ins and demonstrations, it alarmed” the government, says Musa Shteiwi, professor of political sociology at the University of Jordan.

“In the mind of the state it was another attempt to push for something more in these uncertain times when the government budget is under strain due to the coronavirus,” he says. “The government saw it as the wrong time and wrong approach to discuss economic demands.”

A segment of society agrees, worrying that protests may rock the stability in the resource-poor kingdom.

“All of us are suffering economically. The time is not right for a protest,” says Hussein, a farmer whose exports have been hit by pandemic logistics, and who only gave his first name. “Do they want to destroy the country for a 40-dinar [$56] raise?”

Yet as the crisis escalates, security forces are crossing previously-held red lines, such as assaulting and arresting women and journalists. That is pushing more citizens once skeptical of the teachers’ demands to side with the union.

“If the teachers are arrested for criticizing the government for cutting their salaries, then any of us could go to jail for being unhappy with the government,” says Abu Laith, an Amman shopkeeper who counts himself among those initially opposed to the teachers’ demands amid the pandemic.

“All of Jordan is unhappy with the economic situation and the government; all of us could be in jail right now,” he says. “Any one of us could be a teacher.”

The crisis has started to dent the reputation of West-friendly Jordan, which has drawn rebukes from the Office of the United Nations High Commissioner for Human Rights, Reporters Without Borders, and Human Rights Watch, among others.

Yet the greatest casualty so far has been citizens’ support for – and belief in – the government’s coronavirus efforts.

The Jordanian government had built up goodwill for its pandemic response, which citizens treated as a war effort. The government’s approval rating shot from 45% in January to 77% in late March, according to public opinion surveys for the Center for Strategic Studies at the University of Jordan.

Yet a few months later, and with cases rising again, Jordanians on the street and on social media say they have soured on the government’s response.

In its arrests of teachers, the government has cited “defense orders” banning gatherings of 20 people or more. This week it also cited the pandemic as the reason to increase police presence in cities and towns across the country and enforce electronic monitoring of residential areas, and said the whole country could be put back under lockdown if case levels remain high. In response, citizens are voicing their suspicions, on social media and in the streets, that Amman is manipulating coronavirus statistics for its political needs.

Public doubts come amid a surge of coronavirus cases owing to the arrival of infected truck drivers from neighboring states. This week new infections reached 12 to 15 cases per day.

“Everywhere people no longer believe the government’s stats or statements on corona. They think it is a conspiracy and the government wants to put Jordanians on a lockdown to prevent public gatherings,” says Oraib Rantawi, director of the Amman-based Al Quds Center for Political Studies. “The government has lost all this credit and goodwill for nothing.”

As protests continue, the debt-ridden Jordanian government, which boasts it protected 70% of salaries and expanded health care during the lockdown, insists it must freeze government salaries and new hiring for the rest of 2020.

Yet while the most vulnerable have been bolstered, heading into September, Jordan’s middle class is under serious strain, with many having lost jobs or income and are struggling to pay mortgages, car loans, and groceries.

Teachers are emerging as a symbol of this struggle.

“If the government thinks they can silence me like they are trying to silence the teachers, they have another thing coming,” says banker Um Samer, who is selling her Amman house after losing her job.

Observers say it is a lesson that in these extraordinary times, what had been tried-and-true regime tactics have unexpected consequences.