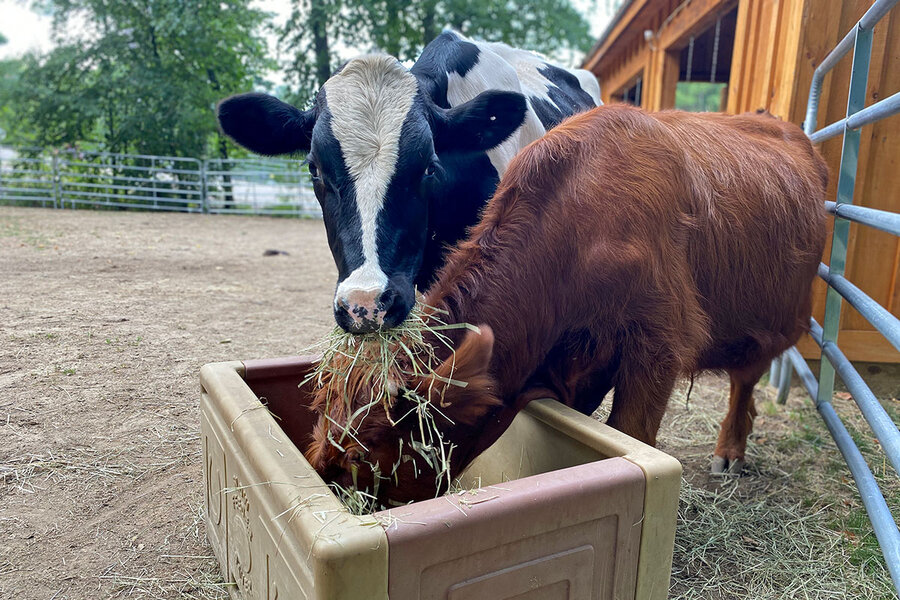 If you want to see an example of a complex social structure, look no further than your local dairy.

Herds of cattle are vastly more intricate than scientists had previously imagined, according to research published earlier this month. The researchers analyzed grooming behavior among dairy cows using a statistical tool borrowed from human sociology, and uncovered a rich network of friendships, cliques, insiders, outsiders, peacemakers, and nonlinear dominance hierarchies.

“It’s an adjustment of how to think about them as a species,” says Gustavo Monti, study lead author and a professor at the Institute of Veterinary Preventive Medicine at the Austral University of Chile. “They have their own lives, they have complexities, and there are relationships between animals.”

This complexity was on display this month at Unity Farm Sanctuary, an animal-rescue nonprofit in Sherborn, Massachusetts. There, bovine friends Audrey, Eliot, and Pal, along with their neighbor Dudley, devote time to soothe one another.

“In the time of COVID there’s a lot of conflict. There’s worry about resources, there’s worry about societal stability, there’s lots of tension,” says sanctuary co-founder John Halamka. “There’s no question that in a time of uncertainty, coming together human-to-human, or human-to-animal, is therapeutic to everyone.”

It’s lunchtime at Unity Farm Sanctuary, and all the residents are munching away. In the “Forever Friends” pen, Audrey and Pal gently jostle heads to share the trough. When Pal nudges Audrey’s face out of her way, she stops and licks his ear and his neck as if to say, ‘That’s OK. I still love you,’ before placing her head back in the haystack.

That may seem strange – especially when social distancing is the behavior du jour – but Audrey and Pal are cattle. And the licking is a way of showing affection and bonding among bovine.

Research published earlier this month in the journal Frontiers in Veterinary Science found that such grooming actually reinforces social relationships among cows in a herd. That’s right: Cow herds have complex social dynamics. Cattle may seem mindless, munching on grass and feed all day, but the inner lives of bovine are far more meaningful and complex than they may seem. And the more scientists study their social interactions, the more it seems that cattle, like humans, need to feel connected to others.

“It’s an adjustment of how to think about them as a species,” says Gustavo Monti, study lead author and a professor at the Institute of Veterinary Preventive Medicine at the Austral University of Chile. “They have their own lives, they have complexities, and there are relationships between animals.”

Some 8,000 to 10,000 years ago, cattle lived in mostly female family groups made up of grandmothers, mothers, and their offspring, and bulls would come in to breed, explains Trevor DeVries, Canada research chair in dairy cattle behavior and welfare and a professor at the University of Guelph. The social structure of the herd would depend largely on the maternal lineages in the group and age of the different cows.

Today, domesticated cattle mostly live in much larger groups, typically separated by age, and are shuffled around among herds and even farms based on breeding and milk production patterns. But the sociality of cows doesn’t seem to have eroded. Rather, researchers say the cows build a different kind of social network, and it’s more complex and nuanced than a simple biological family structure.

Instead of being based on a lineage, cattle grouped together on a farm tend to establish a hierarchy of sorts that may have more to do with the size of the animal or temperament, says Dr. DeVries, who was not involved in the new study. But it’s not a simple, linear hierarchy. Cow A, for example, might be dominant to Cow B, and Cow B to Cow C, but that doesn’t mean that Cow C is submissive to Cow A. The setting might matter, too. Different cows with different temperaments might be more assertive around food than around places to lie down, for example.

“You see black-and-white cows, and you think, ‘OK, they are pretty similar,’ but that is really not the case. They have their personalities, they have their characters, and this is really reflected in their social interactions,” says Borbala Foris, a postdoctoral researcher in the Animal Welfare Program at the University of British Columbia. “There are ones that are more connected to the group, more sociable, in the middle, and there are more isolated ones.”

Most of this research has been done on dairy cows – and thus all-female herds. But at Unity Farm Sanctuary, Audrey and Pal seem to exhibit similar dynamics with their paddock-mate Elliot (Audrey is a heifer and Pal and Elliot are both steers). Elliot is the biggest and the other two move away when he moves toward his preferred lunch pail.

But it’s not all about food – or dominance. Researchers are increasingly discovering how cattle form particularly strong social bonds and rely on each other for support when things get stressful.

Licking one another, a behavior known as allogrooming, seems to reinforce those social connections. The new study found that there was a mutualism to the behavior. Cows tended to groom other cows that had previously groomed them, perhaps strengthening a sort of friendship among individuals. What’s more, the cows that did not focus their allogrooming on specific individuals actually received less attention themselves over time.

Researchers previously posited that younger, more submissive cows likely groomed older ones to reinforce dominance, but, to Dr. Monti’s surprise, the research team found that it was the older members of the group that tended to groom more cows.

“Our results indicate that licking behavior is important to make friends and to maintain harmony in the herd. That older cows groom more individuals suggests that they take the role of ‘peacemakers’ in the herd,” Dr. Monti said in a press release.

Scientists also thought that allogrooming was a way that cattle calmed one another when stressed. But researchers observed more licking behavior when the cows were at ease, suggesting that it’s more about building friendships and social cohesion in a settled group.

That’s not to say that cattle don’t comfort one another. The animals do seem to gravitate together or exhibit signs of mutual stress when one is upset or ill. Often cows will lie near a stressed herdmate, particularly if it’s a friend.

At Unity Farm Sanctuary, Audrey, Elliot, and Pal have a neighbor in the next pen over – Dudley, a Scottish Highland bull. Dudley is in his own pen because of his massive horns, so the humans at the sanctuary worry about accidents if he were to play with his hornless bovine buddies. But they still find a way to connect through the fence. When Dudley was thought to be ill last year, says Marla Andrews, humane education director at Unity Farm Sanctuary, Audrey would lay by the fence between the pens to offer him company.