The number of workers receiving unemployment benefits fell for the first time since February and new weekly claims continued to ease, offering evidence that layoffs related to the coronavirus pandemic are slowing.

Initial claims for unemployment benefits declined to a seasonally adjusted 2.1 million last week from 2.4 million the prior week, the Labor Department said. The level of claims is still 10 times prepandemic levels but has fallen for eight straight weeks.

Meanwhile, the number of workers receiving jobless payments for the week ended May 16 was 21.1 million, down 3.9 million from the prior week. The level remains well above the record before this year—6.5 million in 2009—and underscores that tens of millions remain jobless.

Commerce Department data on Thursday showed gross domestic product—the value of all goods and services produced across the economy—fell at a downwardly revised 5.0% annual rate during the first quarter, overlapping in March with when the pandemic hit the economy.

Corporate profits declined sharply to start the year, the Commerce Department also said, and orders for long-lasting durable goods, such as machinery and trucks, fell 17.2% in April from a month earlier.

Fewer workers on unemployment rolls adds to evidence that while layoffs have been steep and are continuing, some Americans are getting back to work. That suggests the U.S. labor market is at an inflection point where new layoffs are largely offset by hiring and workers are being recalled to their old jobs.

Crystal Hollings, of Pascagoula, Miss., is among those returning to work.

She was laid off from the Goodwill Ocean Springs Mega Store for several weeks this spring, but recently returned to prepare the thrift shop for a June 1 reopening. Unemployment benefits allowed Ms. Hollings to pay bills, but she was relieved to return to a job she said lifted her and her family out of homelessness in 2016.

“I love what I do and I love being around people,” she said. “I’m just trying to make it safe and clean for all our customers to come back.”

The store will require employees to wear masks and gloves and stay 6 feet from customers. When Ms. Hollings reapplied for employment she sought, and received, a promotion to assistant manager. Not all of her former co-workers returned, she said.

“Some didn’t want to come back because they’re still iffy on the pandemic,” said Ms. Hollings. “I wanted to come back the next day [after her layoff]. I’m not one to sit at home.”

As states allow businesses to reopen and citizens to move more freely, many companies are recalling workers, though often fewer than they laid off in March or April. Restaurants, hit hard by the crisis, face months of adjustment as the virus upends the industry’s business model.

Employees reported for 17% more shifts for the seven days ended May 24 than they did six weeks earlier, when job activity bottomed out, according to Kronos, a Massachusetts workforce management software company.

And some firms have begun hiring. Job search site Indeed.com said job postings have increased during the past three weeks, though the total is still down 35% from a year earlier.

Companies are also bringing back workers to qualify for government loan forgiveness, though some have warned they may need to lay off employees again when that support runs out.

Still, companies are continuing to announce layoffs. Boeing Co. said this week that it will shed more than 13,000 employees and American Airlines Inc. said it would cut its management and administrative staff by 30%, amounting to more than 5,000 workers.

Others are planning to increase staffing levels. Amazon.com Inc. plans to keep most of the U.S. jobs it added to meet demand in March and April as housebound Americans turned to online deliveries. Walt Disney Co. said it plans to begin reopening its Florida theme park at reduced capacity in mid-July.

“I think we’ve hit the bottom, as far as layoffs,” said Marianne Wanamaker, a labor economist at the University of Tennessee. “Auto factories and suppliers have called back workers and you’re seeing states that shut down construction allowing those projects to restart,” she added.

Many economists say it will take many months, if not years, to replace all the jobs lost this spring. Forecasters at the University of Michigan project the pandemic-related shock will result in about 30 million total jobs lost, with about a third of those returning this summer.

The expected long recovery underscores the depth of the economic contraction the virus caused. Most economists expect a bigger contraction in the second quarter, when lockdowns continued for weeks before states started slowly reopening their economies in May.

Some businesses are starting to see increased, though still halting, demand for their products.

Tents Unlimited, an event rental company in Torrington, Conn., recently recalled three laid-off workers after it qualified for a federal loan and the state allowed restaurants to start serving patrons outside last week. That caused a rush in orders for tents and tables, said Brittany Sherwood, who owns the business.

What has unemployment been like where you live? Let us know using the form at the end of this article.

The company still has one employee on layoff and has forgone hiring about six temporary workers it would have needed to staff the usual crush of spring weddings and corporate events.

“It’s going better—it was pretty bleak before,” Ms. Sherwood said. The restaurant orders don’t replace all the lost work “but it helps pay the bills.” The company’s sales are still down 80% from last year, but she is hopeful it can survive until 2021, which she expects to be a spring busy with rebooked weddings.

The primary claims totals from the Labor Department exclude self-employed and gig-economy workers receiving unemployment benefits for the first time through a temporary coronavirus-related program.

New claims to that program fell slightly in the week ended May 23 to 1.19 million from 1.25 million. Unlike the regular claims program, pandemic assistance data isn’t seasonally adjusted.

Many states have only started paying benefits through the new program in recent weeks, suggesting recent claims likely reflect a backlog built since March. It is also likely some applying for the relief program earlier sought assistance through state programs and had applications rejected.

—Harriet Torry and Josh Mitchell contributed to this article. 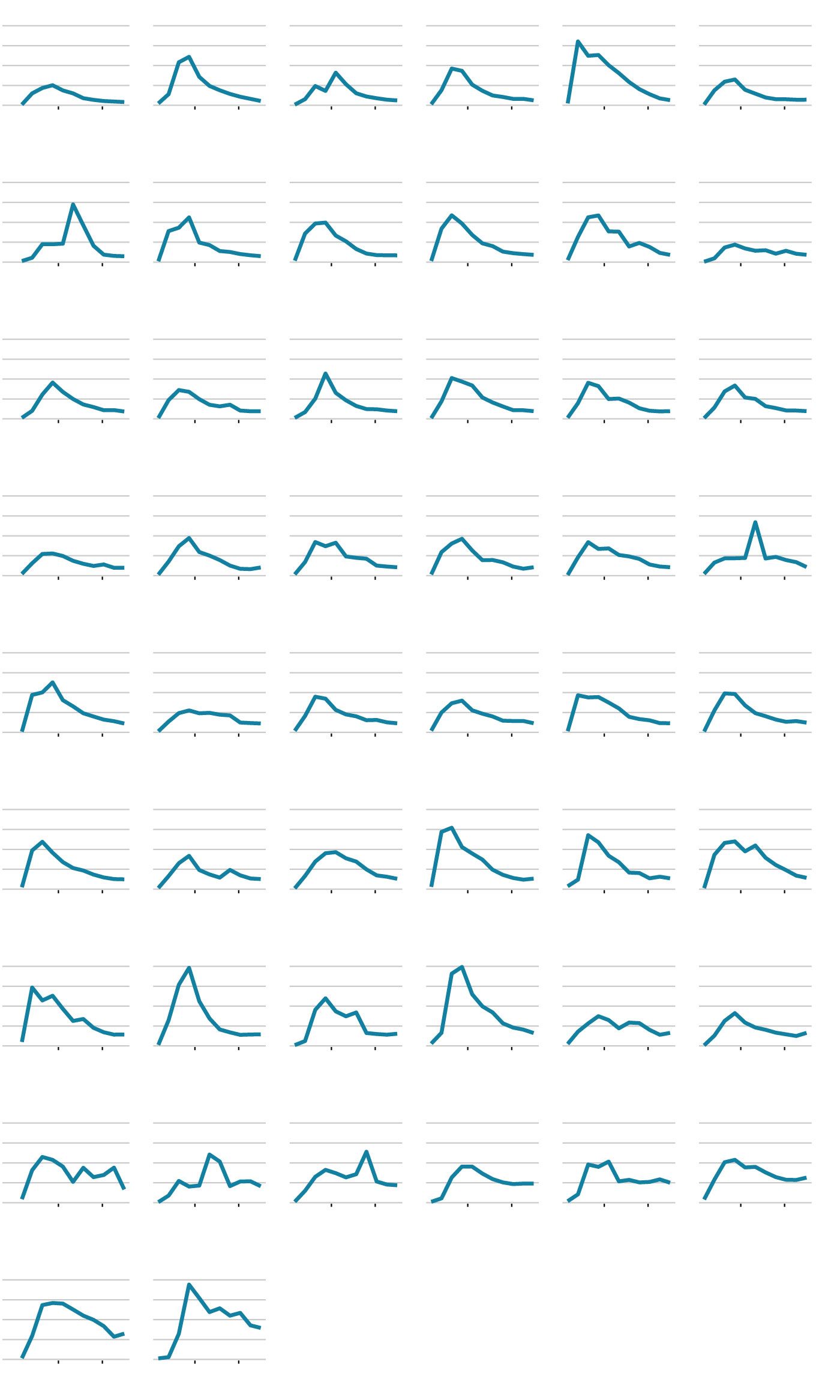 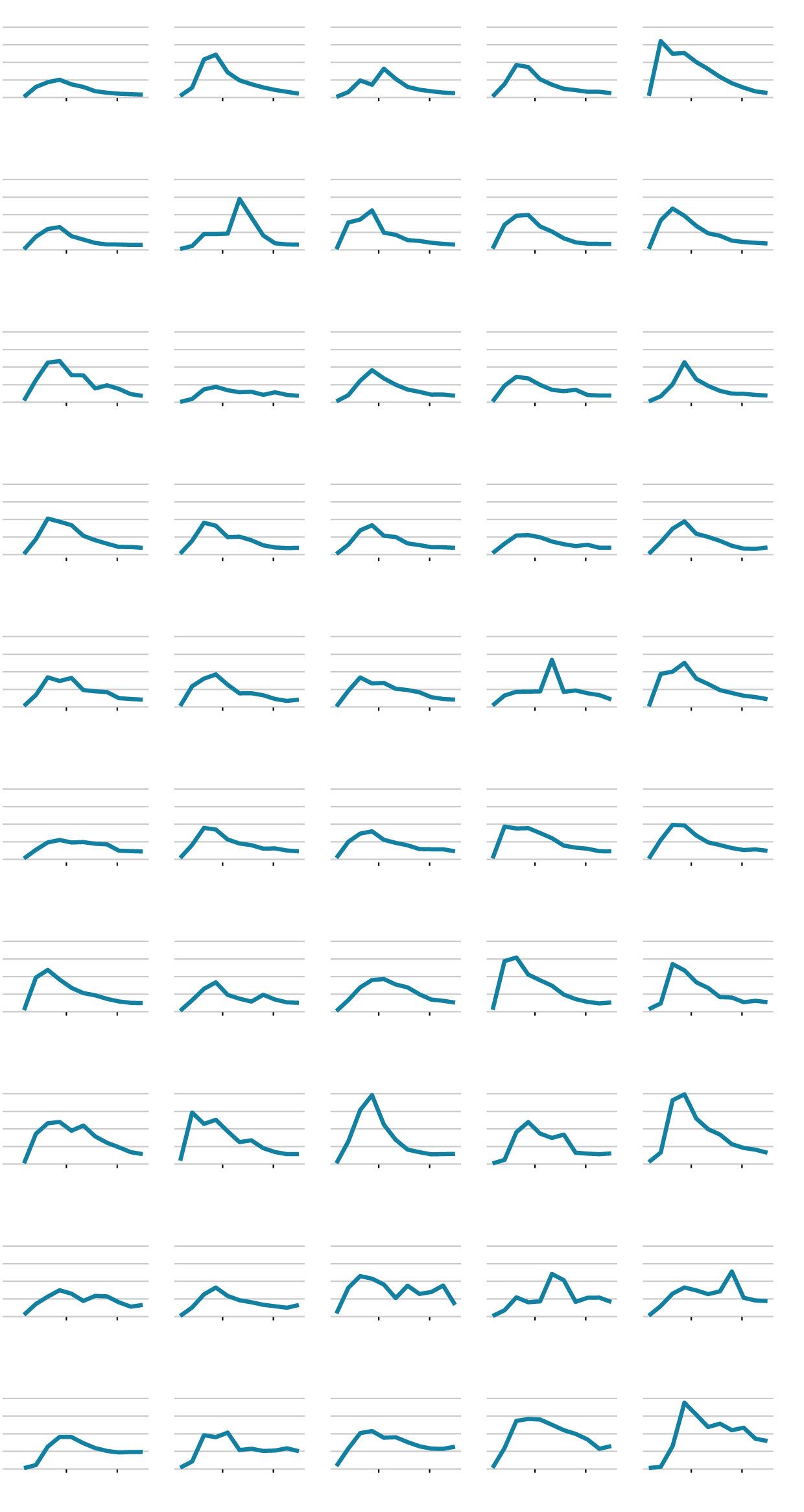