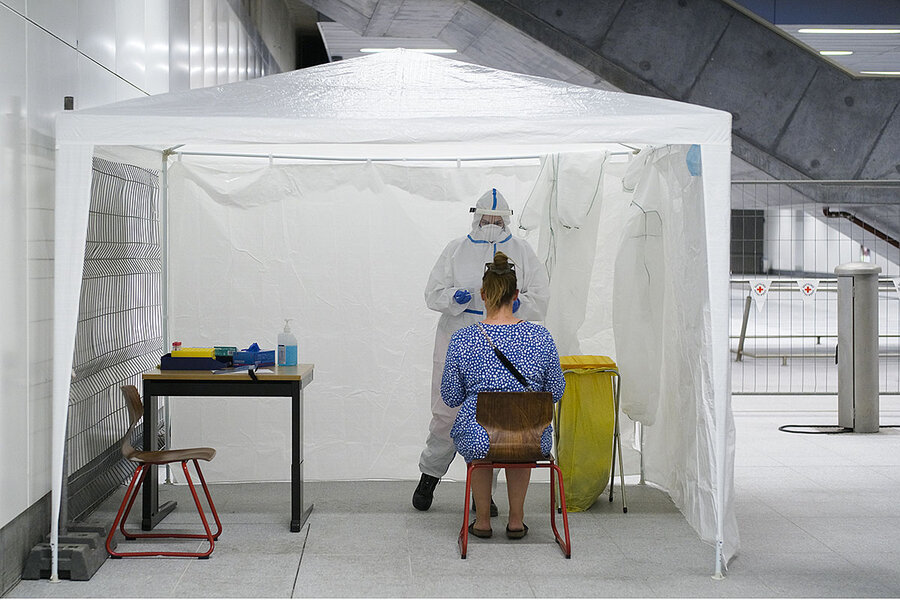 As COVID-19 case numbers tick upward in Germany and Israel, the two countries are putting considerable resources behind their contact-tracing efforts in order to contain the pandemic – albeit in different ways. But it is becoming clear that holding the disease at bay is only as effective as a multifaceted, flexible strategy that includes tracing: identifying who’s infected and who they’ve spent time with, quarantining, and tracking cases.

The German state of Baden-Württemberg came up with a “flexible personnel planning” strategy, shifting personnel between government departments, pulling people out of retirement, asking part-timers to ramp up hours, and recruiting new applicants to help contact trace. In all, they’d identified about 2,400 people available if needed.

That preparation has paid off. “The number of people we have had to trace has doubled since the beginning of May,” says Dr. Isolde Piechotowski, a state official.

Israel has turned to the military after a summer outbreak. An army unit that deals with civilians has erected a contact-tracing center in Ramle in central Israel. It is part of the command being established to ensure information is shared between government agencies and public health services.

“The big advantage of the army is that they can do things quickly,” says Liora Valinsky of the Health Ministry.

Typically, Lisa Hermann is a psychology master’s student. But times are far from typical in the town of Lübeck in northern Germany.

With the federal government desperate to keep the coronavirus contained, her university circulated an ad seeking students to help with contact tracing. Having finished her degree half a year early, Ms. Hermann submitted an application. One interview later, she’d signed up for a 39-hour-a-week gig as one of Germany’s newest “containment scouts,” paid €2,325 ($2,749) a month to help with efforts throughout the country.

“It’s similar to the job I want to do in the future, which is help people get through psychologically difficult times,” Ms. Hermann says. “But sometimes the work is very stressful.”

In Ramle, Israel, Liora Valinsky, the director of public health nursing for the Health Ministry, is training a very different set of contact tracers: soldiers. Israel’s traditional contact tracing was underfunded and understaffed, with its efforts initially focused on mass cellphone tracking. After the COVID-19 infection rate spiked over the summer, the government called in the army to lead a new, multipronged effort of testing, tracing, and quarantining.

As case numbers now tick upward in Germany and Israel, the two countries are putting considerable resources behind their contact-tracing efforts in order to contain COVID-19 – albeit in different ways. While Germany has called on civilians and Israel the military for additional reinforcement, it is becoming clear that holding the disease at bay is only as effective as a multifaceted, flexible strategy that includes tracing: identifying who’s infected and who they’ve spent time with, quarantining, and tracking cases.

An early, rigorous start in Germany

In mid-April as cases were spiking, the German government decreed a team of five tracers must be assigned for every 20,000 people. Execution would be left to each of Germany’s 16 states, and extra help from the federal government would be doled out for hard-hit areas.

“One problem was how were we to implement this?” says Dr. Isolde Piechotowski, head of infection protection at the Ministry for Social Affairs and Integration in Baden-Württemberg, Germany’s third-most populous state. They came up with a “flexible personnel planning” strategy.

They began by shifting personnel between government departments, pulling people out of retirement, asking part-timers to ramp up hours, and recruiting new applicants to help contact trace. In all, they’d identified about 2,400 people available if needed, says Dr. Piechotowski.

That preparation has paid off, now that infections are again trending upwards. “The number of people we have had to trace has doubled since the beginning of May,” says Dr. Piechotowski.

Countrywide, the strategy also morphed over time, as more information surfaced about the virus and how it spreads. Tracing teams learned on the fly, with one example being the streamlining of how authorities communicate with infected persons.

“At the beginning, we’d send a written ordinance that they’d need to go into quarantine, says Dr. Jakob Schumacher, deputy public health officer of the Berlin district of Reinickendorf. “Now people get phone calls.” Calmer times were used to train and reorganize.

In April, a points system was implemented to help determine who would get a free test. Those in Category 1, or at highest risk of infection, include people who have had at least 15 minutes of face-to-face contact with an infected person. Lower-risk Category 2 might include someone who sat a couple of rows away from an infected person on an airplane.

“We give points depending on risk factors,” says Dr. Schumacher. “We couldn’t keep up with tracing and testing – this score makes [our efforts] more efficient.”

Health officials in Baden-Württemberg are now also testing asymptomatic people, as well as those outside the typical risk categories in “vulnerable” settings, such as nursing homes. Germany can do this, in part, because of a concerted effort to increase test availability and lab capacity. More testing can reduce tracing workload, says Dr. Piechotowski. “We think that this way we can reduce the numbers.”

Calling in the cavalry in Israel

When the initial outbreak of COVID-19 occurred this spring, Israel managed to quash it with a swift and severe lockdown. But over the summer, new daily cases have rocketed as high as 2,000 – similar to daily counts in Germany, a country with nearly 10 times the population.

“There was a false sense of assurance that somehow we found the formula to beat the dissemination of the virus,” says Dr. Ran Balicer, director of health policy planning at Clalit, Israel’s largest health care organization.

That’s part of the reason why, at the beginning of April, only 27 nurses nationwide were charged with contact tracing, and then reinforced later that month with 300 more. At that time, Israel had been relying predominantly on an atypical, controversial type of contact tracing while a swift and effective lockdown helped lower infection rates. The government had asked its intelligence service, Israel’s version of the FBI, to deploy mass surveillance capabilities to monitor COVID-19 patients and those who have come in contact with them.

Also used in counterterrorism, the practice has come under fire for being what critics say is dangerous government overreach. It also appears to be wildly inaccurate. According to data provided to the Knesset in July, some 50,000 out of 415,000 Israelis sent into quarantine via the surveillance methods were found to have been contacted in error. It was later determined they hadn’t come into contact with infected individuals after all.

Pleas for additional staffing to help with traditional contact tracing were repeatedly blocked by government bureaucracy, Ms. Valinsky says, as they operated on a “pre-pandemic mindset.” “It’s like we are living in two different worlds,” says Ms. Valinsky. “One is the emergency world of COVID and the other is the bureaucratic system, and the two just don’t meet.”

As pressure to reopen the economy built, a spike in cases soon followed as Israel was transformed into a cautionary tale cited around the world for how not to transition from lockdown.

Now, soldiers have been added for contract tracing. In Ramle, a city in the center of Israel, an army unit that deals with civilians has erected a contact-tracing center. It is part of the central command being established to ensure information is shared between government agencies and public health services.

“The big advantage of the army is that they can do things quickly,” says Ms. Valinsky. Contact tracers are drawn from the army’s pool of university graduates as well as its teachers’ corps, and subsets of the first 300 soldier recruits are already in training.

The Health Ministry has hired nearly 300 medical and nursing students, along with 350 civilians, among them furloughed employees from El-Al, Israel’s airline, for the work. Their hope is to soon have more than 1,000 contact tracers on the task.

Back in Germany, Ms. Hermann is finding that questions now roll off her tongue, having undergone hours of video, PowerPoint, and online training: Where was contact with the infected person? What was the context? Inside or outside? For how long? Did you drink from the same glass?

Ms. Hermann is pleasantly surprised by how knowledgeable the people are on the other end of the line. “Their information is high quality,” she says, recalling conversations about the impact of air conditioning and the aerosolized method of virus spread.

Ms. Hermann also liaises with airlines – with an additional colleague responsible for holiday returnees – and submits data to the Robert Koch Institute, the federal agency responsible for overseeing coronavirus control. “I’m the one doing statistics, and others write texts very well and communicate with quarantined individuals. Some have kids, so they specialize on school-related issues,” she says. “We’re moving around on the team based on individual strengths.”